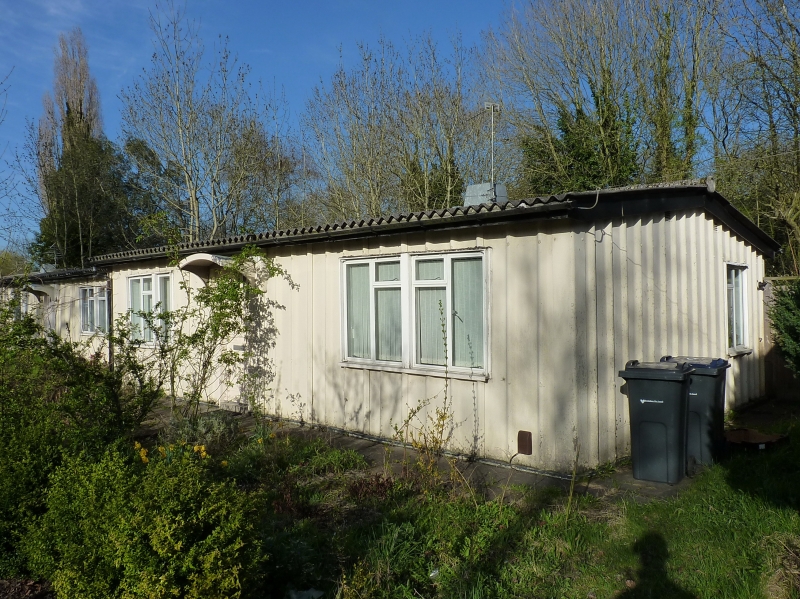 DESCRIPTION
Prefab with shed. Erected in 1945 under the Housing (Temporary Accommodation) Act by the Ministry of Works, the City Council supplying the site and foundations. Phoenix design, a welded steel tube frame clad in cream-painted corrugated asbestos sheeting with internal timber lining and partitions. Shallow-pitched corrugated asbestos roof with felt lining, central apex and low chimney. One storey. The dimensions of the prototype Portal bungalow of 1944 were adopted (32'4" by 21'3"), as were its provision of two bedrooms to left of hall, living room to right and the standard Portal kitchen and bathroom unit, delivered as a ready-assembled unit to site. Timber windows with metal opening casements and top-lights, the living rooms to right with distinctive double casements mirrored around central mullion. Central door with arched fanlight under curved metal porch that is an idiosyncratic feature of the Phoenix design. Similar casement windows to rear. Shed at rear of identical date and construction.
The interior was designed to be fully fitted at a time when furniture and kitchen fixtures were unavailable. Living room with fitted shelving, principal bedroom (at rear) with fitted cupboards. Kitchen, bathroom and separate WC fitted as single unit, designed by the Ministry of Works, and some features remain.

HISTORY
Some 2,428 Phoenix prefabs were erected in the United Kingdom as part of the Temporary Housing Programme, which erected 156,623 temporary bungalows between 1944 and 1948. This was a scheme devised by Lord Portal, Minister of Works, to relieve the post-war housing shortage at a time when conventional materials were unavailable and wartime industries needed a new peacetime function. The Phoenix is one of the rarest of the eleven approved types, though one of the most substantially constructed. Modelled on the Portal prototype bungalow exhibited at the Tate Gallery in 1944 they are notable for their fully fitted interiors, which from the first included fitted kitchens with washing machines and refrigerators (then still novelties) I and for their careful layout. The bungalows erected under the Housing (Temporary Accommodation) Act stand out from other prefabricated housing of the period because of their more carefully planned design, internal fixtures their great historical interest and by being detached.

ASSESSMENT
The group of prefabs in Wake Green Road is an unusual surviving example of a rare variant of the Portal bungalow and still more remarkable for its exceptional state of I preservation with few alterations.
(The Builder: 7 September 1945: 195; Brenda Vale: Prefabs, a History of the UK Temporary Housing Programme: London: -1995).