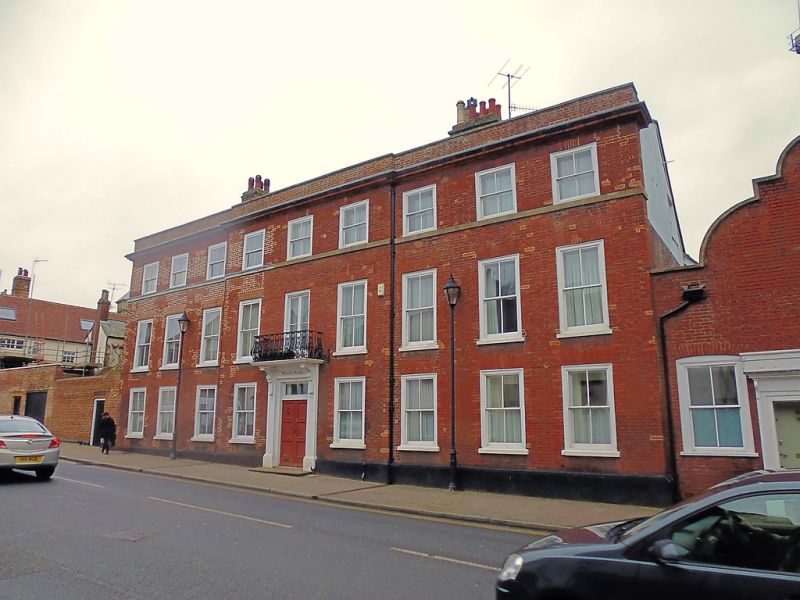 House, now divided into 3: Mustow House consists of the right
half of the building, including the central entrance; Mustow
Corner House occupies the left half, with an entrance door in
the west end. The Garden House is in a former C19 rear wing.
C16 and C17; refronted in the C18, with further early C19
alterations and additions. Red brick front with a plain
parapet and a moulded brick cornice and fascia; render to
sides and rear; timber-framed core. Plaintiled roof.
EXTERIOR: 3 storeys and cellar. 9 window range, arranged
3:3:3, with the centre breaking forward slightly; sashes in
flush cased frames with a single vertical glazing bar. The 2nd
storey windows are similar but smaller with a raised stone
band at sill level. Central entrance door with 2 leaves, each
of 3 sunk panels, and a plain rectangular fanlight above. A
mid-C19 wood doorcase has a flat pediment on moulded brackets
with an ornamental iron balcony above.
The rear has 2 gables and small-paned sash windows in flush
cased frames. The Garden House, which is approached at the
rear of the building, is in 3 storeys, rendered along the east
side with a red brick gable end. 2 16-pane sashes in flush
cased frames along the side.
INTERIOR: Mustow House: cellar below rear with plastered
walls, part vaulted. Entrance hall with boxed-in beams,
panelled walls and an open C16 fireplace with stone jambs and
a plain cambered timber lintel. Floor paved with
purpose-designed C19 encaustic tiles: a central motif with a
rayed head of Ceres flanked by 4 Greek heads in profile and
surrounded by a wealth of Classical ornamentation. To the
right of the entrance hall, a parlour with bolection-moulded
panels and dado, panelled cornice and boxed-in main beam. A
fine mid-C17 open well stair and balustrade with dumb-bell
balusters, square newel posts with moulded heads, moulded
handrails and closed strings. Above the stair, the ceiling has

been raised and coved.
On the 1st storey heavy original studding is exposed along the
rear wall of the front range. The top storey is an early C19
addition. Mustow Corner House contains one ground storey room
with bolection-moulded panelling, dado and fireplace surround.
During restoration in the 1980s the original timber front wall
was uncovered and is still in situ. No other timbers visible.
The house was extended westwards in the early C19 at the same
time that the top storey was added; C18 prints show it as a
2-storey building with a row of dormer windows and the
entrance door not central to the front.
(BOE: Pevsner N: Radcliffe E: Suffolk: London: 1974-: 152).