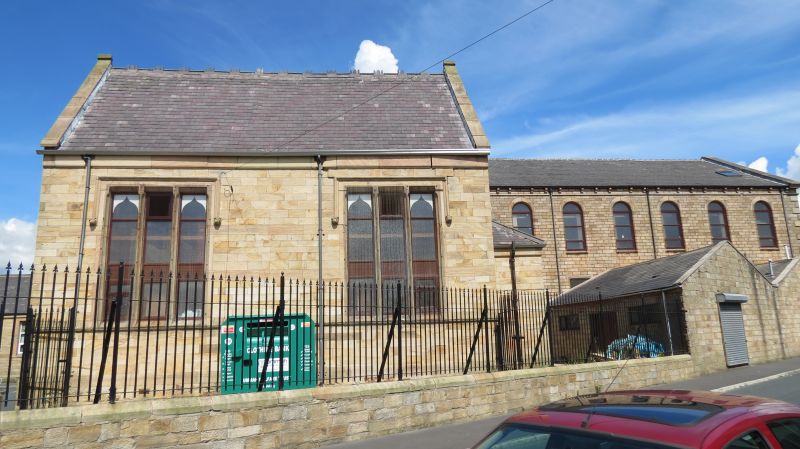 Baptist church now Islamic school, with attached forecourt
railings and gate piers. Dated 1877 on 1st-floor band;
altered. Sandstone ashlar, slate roof. Debased Romanesque
style. Rectangular plan on triangular site, set back facing
the angle.
EXTERIOR: 2 storeys, a gabled 3-bay facade (1:3:1 windows),
symmetrical, with a chamfered plinth, rusticated quoins to the
corners and both sides of the outer bays at 1st floor, a broad
band between floors now mostly plain but with raised lettering
"1877" towards the right-hand end, and an open pedimental
gable with a plain frieze over the outer bays and moulded
coping. The centre has a pair of round-headed doorways at
ground floor with squat set-in colonnettes which have crocket
caps, semicircular overlights, horseshoe hood-moulds with
foliated stops, and panelled double doors, and at 1st floor a
large round-headed window with 2 round-headed lights and rose
tracery in the head, flanked by narrow round-headed windows,
with linked hood-moulds; each of the outer bays has a stair
window of 3 staggered round-headed lights at ground floor, and
a narrow round-headed window above, with circular tracery. The
6-window side walls have square-headed windows at ground
floor, round-headed above, and stone gutter brackets.
INTERIOR remodelled: former gallery removed, upper floor
inserted and ground floor partitioned.
SUBSIDIARY FEATURES: the triangular forecourt is enclosed by
spear-headed bar railings mounted on a low stone wall with
chamfered coping, and in the east side 2 pairs of gate piers
with pyramidal tops and ramped iron gates.
Forms group with associated former school (now Jamia Mosque)
on North Street (qv) to which it is now linked at the rear,
and a striking feature at the junction of 2 side streets
otherwise lined with standardised terraced housing.