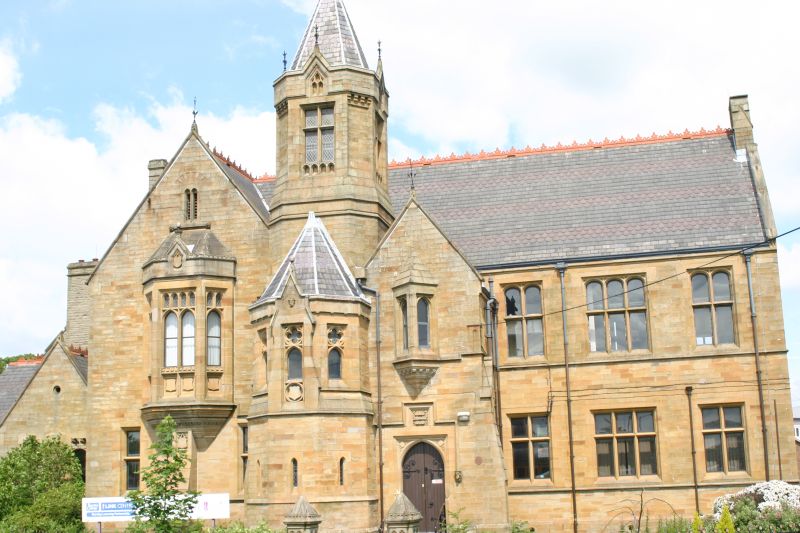 Grammar school, now adult education centre. 1873-4. By William
Waddington (dated 1873 over doorway); enlarged 1901 and 1934.
Sandstone ashlar, steeply-pitched slate roof with fishscale
bands and red cockscomb ridge tiles.
PLAN: essentially a hall-and-crosswing plan, with the main
hall-range on a north-south axis, the crosswing at the north
end, a stair-turret coupled with a porch in the angle between
these, and a smaller wing parallel to the north side of the
other. Gothic style.
EXTERIOR: mostly 2 storeys, plus a short tower, in a strongly
asymmetrical composition focused on a projected 2-storey
5-sided stair-turret which has a short 2-stage octagonal tower
above and behind it, with the gable of the wing to the left
and a gabled 2-storey porch to the right. A chamfered plinth,
moulded sillbands and various stepped and interrupted
drip-bands to most parts. The porch, which has a short
angle-buttress to the right terminating in a gablet, has a
2-centred arched doorway in a chamfered and moulded
square-headed surround, double board doors with ornamental
strap hinges, carved spandrels, an elaborately carved plaque
with banners lettered "GRAMMAR / SCHOOL / 1873", and a
hood-mould stepped over this with an elongated return on the
right terminating in a figured stop caricaturing a
schoolmaster; and a narrow triangular oriel at 1st floor. The
projected 5-sided stair-turret to the left has small lancets
at ground floor, and a deep offset to the set-back upper floor
which has narrow transomed windows with arched lights below
and quatrefoils above, that to the front set in a raised
gableted surround with a finial in the form of a fantastic
beast. The tower behind likewise has a set-back upper stage,
octagonal with cross-windows in the cardinal sides, a
machicolated parapet with gablets, and a pyramidal roof with a
weather vane finial. The principal feature of the gable of the
wing to the left is an oriel window which has an elaborately
carved and moulded base, 2-centred arched lights with

blank-shield aprons, and a brattished parapet with a central
gablet which has a finial in the form of a fantastic beast.
The hall range to the right has mullion-and-transom windows on
both floors, those at 1st floor with 4-centred arched lights.
The lower extension at the north end has (inter alia) a wide
2-window gable and a splayed porch continued to the left, with
a hipped roof.
The rear is in simpler style, with mullion-and-transom
windows, a gabled 2-storey turret, and various later
extensions.
INTERIOR: main school halls at 1st floor of main range and
wing, with arch-braced roofs; large room at ground floor of
main range with Gothic-panelled wooden partition.