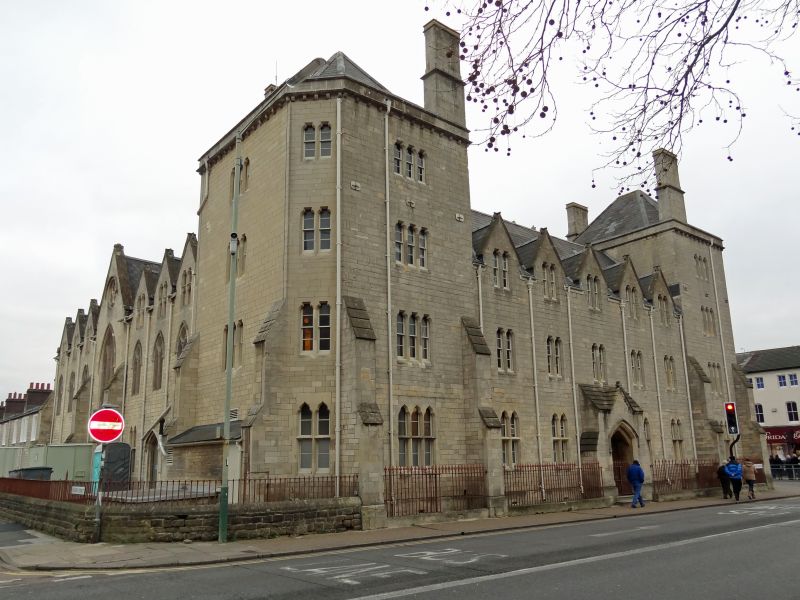 PLAN
Roughly square plan, with full-height open former chapel to the east, and three-storey former lodgings to the west.

EXTERIOR
The building is in Gothic style, with additional C13-style pointed-arched windows. The original main elevation, to Emlyn Square, is of three storeys, with four-storey end bays, and a central entrance, to which was added a projecting, pitched and gabled porch in 1869, on conversion to a chapel. This houses a pointed-arched doorway with hood mould and label stops. Above the door is inscribed WESLEY / CHAPEL / 1869. The end towers have canted corners and buttresses with offsets, corbel tables and parapets with rectangular, ashlar stacks to the hipped roofs. The ground floor has trefoil-headed paired lights with transoms, which are shouldered to the first and second floors; those to the second floor are raised as gabled half dormers. The end bays have similar triple light windows. The main, Faringdon Road elevation is similar, but with the addition of a large central gable with lancets and gable lights between a pair of later square stair towers, returning by broaches to octagonal louvred turrets above the second floor. The ground and first floors have been altered by the creation of double-height glazed openings associated with the building’s later-C20 use as a railway museum, now partially infilled in limestone. The south side has had its ground- and first-floor windows replaced with pointed-arched, traceried windows and a large doorway, and those to the second floor have been retained, with some applied tracery. The east wall, constructed in limestone rubble during the 1860s conversion to a chapel, has double-height windows with tracery.

INTERIOR
The original main range running behind the west elevation has a stone staircase at either end, rising through the three storeys of the central bays. The ground-floor rooms are set off a rear corridor with red quarry-tiled floor, and black tile margins. The former porter’s room, with fireplace, is at the south-western corner. At the north-west corner the site of a former copper boiler is set at the top of steps to the basement, which retains a narrow fireplace opening. The first and second floor rooms, also originally off a rear corridor, have modern suspended ceilings. At either end of the range are rooms in the attic of the four-storey end bays, now accessed by hatches. These attic rooms are unaltered since the building’s use as a lodging house, retaining their four-panelled doors, pierced for ventilation, fireplace openings and some C19 wallpaper. King-post roof structure. The remainder of the building is occupied by the double-height former chapel. The west wall has high, traceried internal windows overlooking the former chapel from the rooms in the main range. The former chapel has a panelled ceiling divided by heavily-moulded beams, carried on double-height, keeled cast-iron columns, their pierced brackets with quatrefoils.

SUBSIDIARY FEATURES
To the west elevation, running between the buttresses and the jambs of the porch, are RAILINGS with fleur-de-lys heads, set in a limestone ashlar plinth. Gates made of similar uprights enclose the porch.

Employees in the railway works were, from the beginning, drawn from across the country. A lodging house for single men employed on the site was proposed in the mid-1840s, on a plot in Emlyn Square, within the railway village. A design for the building was drawn up by Isambard Kingdom Brunel: an extensive, three-storey building in a Tudor Gothic style. Construction began in 1847, but owing to a recession in 1847-1849, building was abandoned when only the ground floor was under way. When finances recovered, the lodging house was begun afresh, to entirely revised plans, in 1853-1855; its design, still Gothic in style, was intended to match the nearby shop blocks within the railway village. Two wings, abutting the rear of the main range, created a U-shaped plan. Large corner towers and smaller windows than those proposed by Brunel gave the structure a more institutional appearance, perhaps giving rise to its local name of The Barracks. The lodgings provided over 100 sleeping rooms, each with a bed, chest of drawers and a chair; other facilities included kitchens, a bakery and day rooms. The building was overseen by day and night porters.

The hostel proved unpopular with lodgers, who found the rather institutional nature of the establishment less attractive than the more homely option of lodging with local families. The building appears to have remained largely empty until 1861, when the accommodation was remodelled into two- and three-room units to house iron workers and their families, arriving from Wales to staff the new rolling mills at the GWR works. The barracks became increasingly overcrowded and insanitary, until in 1863, a new development of railway cottages was constructed in Cambria Place to provide more suitable housing. By 1866, the building had been condemned as living space, and in 1867, the building was sold to the Wesleyan Chapel Trustees for £1,600, to be converted to a Methodist chapel.

The chapel conversion, creating a space capable of accommodating 1,100 worshippers, was designed by architect Thomas Lansdown. The main range of the existing building, facing west, was turned to use as classrooms and ancillary spaces, with a large schoolroom on the first floor. The inner facing walls of the wings were demolished and the courtyard roofed over, to give a square plan enclosing the whole of the plot, and creating a large, full-height chapel. The eastern walls of the wings were demolished and entirely rebuilt. A large gallery was constructed against the south wall, to accommodate up to 500 Sunday School children, and a new south entrance was created, with the addition of towers housing stairs to the gallery. Traceried Gothic windows were added to the north and south elevations to bring in more light and reflect the building’s religious purpose, and similar windows added to the now-internal rear wall of the three-storey main range, looking into the chapel. The building opened for worship in May 1869, and continued in use until 1959.

In 1962, the chapel was converted to use as the GWR museum: the gallery was removed, the former chapel was laid with rail tracks to allow locomotives to be brought in and out of the building, and large glazed openings were created in the south elevation to give access. Other areas were given over to exhibition space and offices. The museum was relocated in 2000 to a new site within the former railway works. The building was subsequently taken over for music teaching and performance space, in which use it remained in 2020; the large openings for locomotives were remodelled and the rails removed from the main hall.

The former model lodging house for workers at the Great Western Railway works in 1853-1855, expanded and converted to a Wesleyan Methodist chapel in 1869, used as the GWR museum 1962-2000, is listed at Grade II, for the following principal reasons:

Architectural interest:
* for its origins as a relatively rare building type, a communal lodging house for workers at the GWR railway works;
* for the recognisable GWR house style of the original west range, reflecting the style of the rows of workers’ family houses and cottages, and the taller corner buildings which punctuate the streets of the railway village.

Historic interest:
* as a building which has evolved through several significant phases, from lodging house to chapel to railway museum, all reflecting changing requirements of the railway company and its staff;
* as an integral component in the extensive provision of accommodation, leisure and health and welfare facilities for workers at the Great Western Railway works from the 1840s to the later C20.