A Grade II Listed Building in Covingham and Dorcan, Swindon 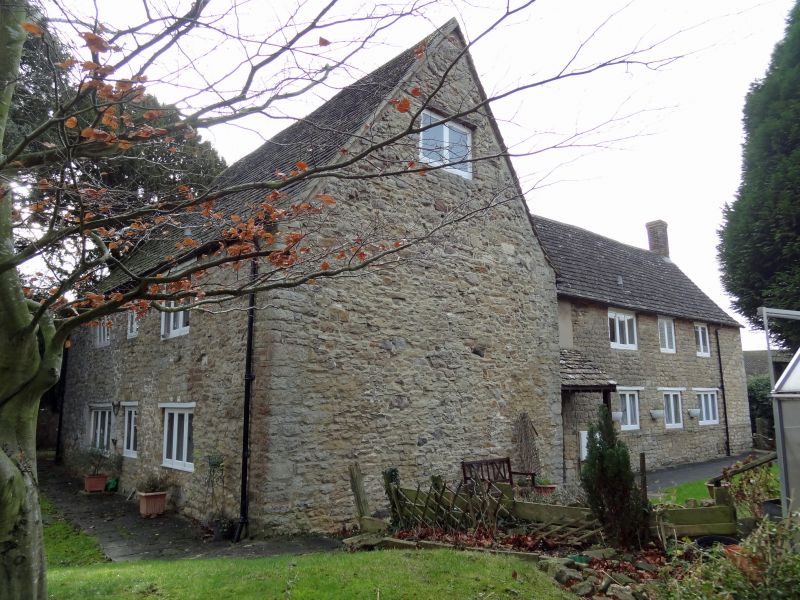 he following buildings shall be added to the list.
SWINDON EAST MERE
SU 18 SE
Liden
4/144
Nos 1-4 (consec) Wick
Farmhouse
II
House now 4 flats. Late C16; probably C18 addition; restored and converted
to flats 1978-9. Rubblestone; graduated Bradstone slate roof. 2 storeys,
3 bays, with 3-bay wing of 2 storeys with attic to rear right and added 2-storey
range to rear of bays 1 and 2. C20 doors and windows the latter with wooden
mullions and casements. SOUTH FRONT: large punch-dressed quoins at right end
to approx 1 metre in height. Original doorway possibly on right of left-hand
window (evidence from interior); C20 doorway in right bay. Windows of 3, 4
and 4 lights to ground floor; 3, 2 and 3 lights above; all having timber lintels
and those to bay 2 with brick jambs and squared stones between them. Roof
hipped on right, half-hipped on left, with ridge stack between right-hand bays,
the base of stone with brick above. Rear: on left, wing as 2-light attic window
with old timber lintel; 2 C20 doorways and various C20 windows to added block
which has brick stack at right end. Right return: windows of 3, 2 and 3 lights
to ground floor; 4, 2 and 3 lights above, all with timber lintels, and those
of left bay having stone quoins. INTERIOR: front right room (in No 2) has
two very large-scantling spine beams with broad chamfers and stepped cyma
stops dividing ceiling into compartments which have moulded plaster cornices
and fine decorative ceiling of interlinked circles (forming petals) with petaled
bosses; moulded frieze to right-hand wall; the front window has C19 architrave
and panelled shutters. Between left-hand bays (in No 1) is a large-scantling
cross-beam chamfered and stopped as before, with mortices in soffit from former
plank and muntin panelled partition; similar spine-beam in left bay, which
has recess (probably former doorway) in front wall, and opposing doorway with
timber lintel in rear wall; this leads into the added range which has large
infilled fireplace with bread oven surviving, and smaller scantling chamfered
cross-beam, with stops as before.