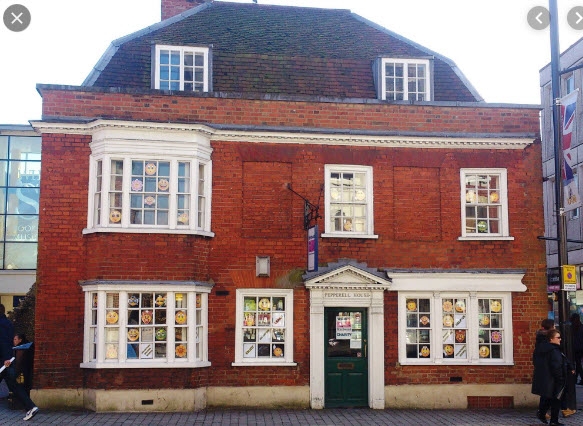 House, now offices. Mainly C18, possibly of medieval origin,
altered in C20. Timber-framed, mainly clad with red brick in
Flemish bond, partly roughcast plaster, roofed with
machine-made red clay tiles. Rectangular plan facing NW;
internal stack near left side, internal stack at rear right.
2 storeys splayed bay of sashes. Ground floor, one C18 sash of
6+6 lights with moulded wooden architrave and flat arch of
gauged brick, and C19 shop window (altered in C20) with
moulded cornice. First floor, two C18 sashes of 6+6 lights
with similar architraves and arches, and 2 blank recesses with
similar arches. Half-glazed door with 2 fielded panels, in
wooden doorcase with fluted pilasters and dentilled pediment.
Dentilled and moulded cornice, plain parapet, hipped gambrel
roof with 2 casements in flat-roofed dormers. At the left side
the upper storey projects about 0.30m beyond the lower storey,
with a plastered coving below. The wall above and at each end
of the overhang is plastered; all the remainder is clad with
brick, of various periods. On the first floor are 2 sashes
similar to those in the front elevation. Similar cornice and
parapet, and one C20 skylight. The right elevation has on the
ground floor a pair of sashes in one aperture, with a common
moulded architrave and a central fluted pilaster, and one
blocked aperture, both with segmental arches, and on the first
floor one C18/19 casement and one blocked aperture, both with
segmental arches. The rear elevation has on the ground floor
one C18 sash, the lower sash altered, now of 1+4 lights. C20
panelled hardwood door in C18 fluted and pedimented wooden
doorcase, opposite the front door.
INTERIOR: all surfaces are concealed by modern materials; the
lower part of the rear stack has been removed. The plan, with
opposite front and rear doorways to right of centre, the
overhang at the left end, and the position, between an ancient
church and an even older road, suggest that this building has
a medieval origin, much altered externally in the C18. Any
further alterations to the structure should be preceded by a
thorough examination of the frame.