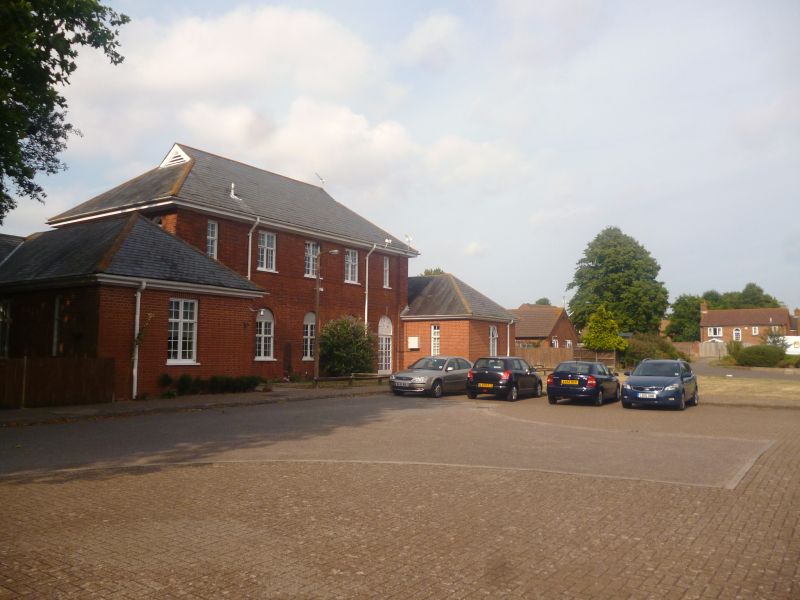 A former airmen's institute and chapel built for RAF Tangmere, of around 1920, converted to apartments in the late C20.

A former airmens' institute and chapel built for RAF Tangmere, of around 1920, converted to apartments in the late C20.

MATERIALS: red brick in English bond, under a slate-tiled roof.

PLAN: the building faces south and is laid out on a Palladian villa plan with centrepiece and projecting pavilion wings, the example to the right extending further east. Behind the centrepiece there are two rectangular ranges orientated east to west, which are connected at their eastern ends by a north-south range.

EXTERIOR: the centrepiece is of two storeys. The pavilions and east-west ranges to the rear are single-storey. The north-south range is predominantly two-storey. Fenestration across the building consists of multi-paned, cross casements or sash windows. The roofs have overhanging eaves and are hipped. The centrepiece and western pavilion have vented gablets.

The principal elevation is largely symmetrical and is comprised of twelve bays (1:5:1:5). The outer bays project forward and are formed by the pavilions which have a single window, except to the right hand (east) side where the pavilion extends for a further five, set-back bays of regular fenestration. The ground floor of the centerpiece is characterised by round-headed openings under brick arches, across five bays. There are multi-paned entrance doors to either end (uPVC to the east) and a single window to the three central bays. At first-floor level, each bay has a regular, flat-headed window, the outliers being narrower. Brick pilasters frame the centerpiece and the side elevations have high-set, round windows. The rear elevation is mostly hidden and has regular, cross casement windows to the first floor.

The west elevation of the left-hand (western) pavilion and the adjacent rear range have a tripartite window with narrow outliers and regular fenestration to their north and south elevations. The northern most range has a single, three-over-three, sash window to its west elevation and regular sash windows interspersed with late-C20 entrance doors to the north elevation. This elevation also has a late-C20 timber gate towards the centre. The eastern end is formed by the northern end of the north-south range. It is symmetrical and has two, six-over-six, sash windows with stone cills, on each storey.

The principal elevation of the north-south range is to the east and is more domestic in character, having two chimney stacks which rise through the hipped roof. All window openings have stone cills: to the ground floor they are narrow, four-over-four sash windows and to the first floor, larger, six-over-six sash windows. The late C20 entrance door is centrally located under a lean-to porch. The southern end is single storey where it joins the rear of the centerpiece. The rear elevation of the north-south range has regular six-over-six, sash windows to the ground floor and a single, larger, six-over-six sash windows to the first floor, where there is also a central, circular window of nine panes. The rear of the eastern pavilion has regular cross casements and a projecting porch with scalloped parapet.

The airmens' institute and chapel (also known as the Spitfire Club) is thought to have been built around 1920. Land for an airfield at Tangmere was requisitioned in September 1917 under the Defence of the Realm Act. Work was well advanced by February 1918 and the field was used for training by the Royal Flying Corps. In September 1918 it was briefly handed over to the United States Air Service before being used as a holding station for squadrons returning from the continent. In common with many airfields, Tangmere was considered surplus to requirements after the First World War and was mothballed in 1920. However, plans for a Home Defence Force led to its reactivation and it was reopened as a Coastal Area Storage Unit for the Fleet Air Arm in June 1925, becoming RAF Tangmere, on 23 November 1926. Numbers 1 and 43 Squadrons flying Gamecock and Siskin aircraft, were the first to arrive and further barrack blocks, married quarters and mess buildings were constructed in the late 1920s. Tangmere saw further expansion in the late 1930s when it was modified to accommodate an extra squadron. This included the construction of more barrack blocks, a workshop and training buildings as well as the extension of the airfield to the east, allowing elongation of the runway.

At the start of the Second World War, it became sector headquarters for Number 11 Group of Fighter Command and occupied a key front line position in the Battle of Britain, defending London and the whole of the south-east. The station was attacked by German aircraft on 16 August 1940 and was very badly damaged including the destruction of two hangars and severe damage to a further three. Workshops, a water pumping station, the officers' mess and the sick quarters were also destroyed and thirteen people were killed. The airfield was the operational home of the famous pilot Douglas Bader who returned to flying duty after loosing both of his legs in an air accident. He was later shot down over enemy territory leaving one artificial leg in his cockpit. The Germans allowed a replacement to be delivered by parachute, but later regretted this allowance as Bader persistently tried to escape. He was eventually imprisoned in Colditz Castle, a location renowned for serial escapees.

Tangmere was also a base for clandestine 'Black Lysander' operations whereby Special Operations Executive (SOE) agents were flown in and out of occupied France. Violet Szabo, who was the only woman to receive the George Cross for outstanding service, left from Tangmere on the mission for which she won her medal. A plaque on the Grade II-listed Tangmere Cottage, commemorates the use of the building as the SOE operations room. Both Bader and Szabo had films made about them, directed by Lewis Gilbert; the 1956 Reach For The Sky starring Kenneth More, and Carve Her Name With Pride in 1958, starring Virginia McKenna.

After the war the airfield was home to the RAF's High Speed Flight and the world airspeed record was broken here in September 1946 and August 1953. The runway was also modified for use by Meteor jet aircraft in the 1950s. The base closed in 1970 although the airfield continued to be used by a gliding school until 1975. In 1982 the Tangmere Military Aviation Museum was founded by volunteers to tell the story of the base and it is located on the edge of the former airfield.

The former airmens' institute and chapel was extended to the north-east in the late C20, but this section of the building no longer remains. In the 1980s, the building was converted into apartments.

The former Spitfire Club at RAF Tangmere, a former airmen's institute and chapel built for RAF Tangmere, of around 1920 and converted to apartments in the late C20, is listed at Grade II for the following principal reasons:

* as a well-designed and early example of the neo-Georgian style favoured by the Ministry of Defence for RAF buildings during the inter-war expansion period of the Royal Air Force;

* the exterior of the building survives well and is little altered.

* it is one of the few remaining airfield buildings at RAF Tangmere, a base that rose to prominence in the Second World War and as a fighter airfield and home to 11 Group, is synonymous with the Battle of Britain.

* with other Grade II-listed listed buildings at the former RAF Tangmere, notably Barrack block 116, the Watch office and Tangmere Cottage, which was used by the Special Operations Executive.