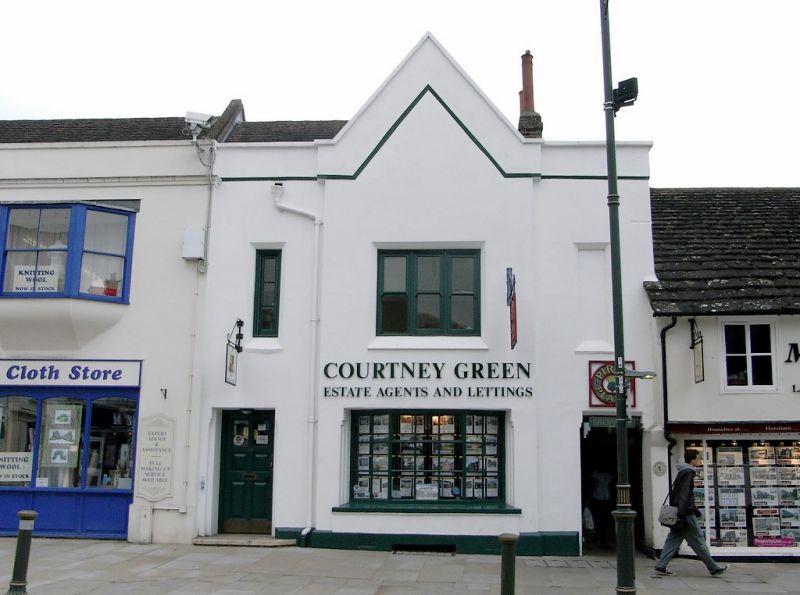 CARFAX
1.
5404
No 25 (John Gorman,
Estate Agent)
TQ 13 SE
1/200
II G.V
2.
Hall-house, C1400, now altered to shop and storage premises. Timber frame with brick
nogging and tile roof, but rendered C19 facade to Carfax. 5 bays extending back along
Piries Place, with small rear prolongation in brick. Two storeys. The facade on
Carfax has a steep gable, solid parapet, and three bays of sash windows, single lights
flanking a tripartite window, all without glazing bars. Large shop window to ground
floor. The right-hand bay bridges Pirie's Place. The side to the lane has three main
posts showing, and small framing to the first floor to these bays. Later openings
to ground floor including glazing-bar sashes to the second bay.

Inside, the first two bays were always floored and the communicating door was in the
present position on the ground floor. Closed truss between had down braces from post
heads, and from crown post which supports a full series of very long, heavy collars.
The next truss is said to be nearly complete and similar. Beyond there is believed
to have been a 2-bay open hall, with a later brick stack inserted in the short second
bay. This stack has a small panelled chimney piece of the early C18 facing into the
last bay; all bays are now floored. Windows dating from the period of flooring or
not long after appear to survive on the yard side.
This early house forms a group with No. 26 and the building behind, which together
define the Medieval width of Piries Place.