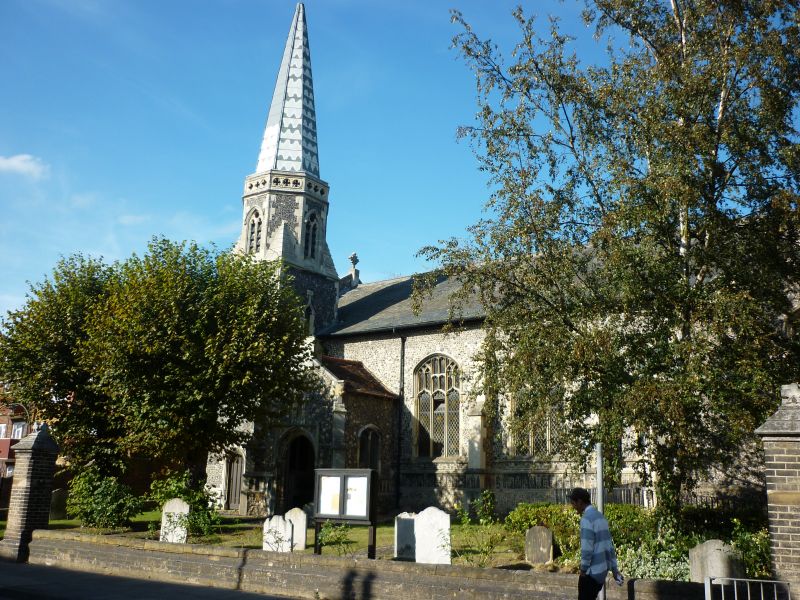 EXTERIOR
Of the medieval church, only the S porch and the S nave wall remain, everything else having been rebuilt in stages in the C19. The S nave wall has C15 windows and a simple, flint flushwork decoration. The S porch is also C15, and has a worn image niche above the outer entrance with a C16 or C17 sundial above it. The outer opening is set in a square frame with carved spandrels, and there are two light windows in the porch side walls. The inner door has a medieval ring handle. The C19 SW tower is in a Decorated style, with ogee-headed openings in the second stage and a polygonal top with a parapet of pierced quatrefoils. Simple polygonal spire. Large C19 perpendicular-style window with vertical tracery. The rest of the church is also largely in a perpendicular style, with some of the tracery modelled on the S nave windows.

INTERIOR
The interior is plastered and painted, with a broad, queen-post roof on stone corbels in the nave. In the 1980s, the chancel was partitioned off to form a hall, the transepts closed off to form a vestry (N) and cloakrooms (S) with rooms above them, and the nave stripped of furnishings and reordered to form an open worship space orientated to the N. Organ gallery of 1982-3 at the E end of the nave with a metal spiral stair.

PRINCIPAL FIXTURES
The church was re-ordered in the late C20 and has no liturgical furnishings of interest. C15 S door with large, medieval ring handle. A little C19 glass, including chancel SE by Clayton and Bell, 1872; nave SE possibly by Hardman and another, also possibly by Hardman in the S transept. Some C18 and C19 memorial tablets, including The Rev Richard Canning, d.1775 and another Richard Canning, d.1726.

HISTORY
St Helen¿s is probably late C11 or early C12 in origin, and was built outside the medieval city walls. The medieval church comprised a short, unaisled nave with a chancel, S porch and small W tower. Of this structure only the S porch and S nave wall survive. The tower was early C12, and early engravings show it with an embattled parapet and a small spike, the latter removed before the early C19. The nave had large, perpendicular windows, and the chancel was apparently brick, with square-headed windows, and was probably built in the C16. The church was altered and enlarged in phases in the C19. The chancel was rebuilt, again in brick, before 1828. N and S transepts were added in 1837, when the medieval chancel arch was removed. This work was all demolished in 1848-9, when the present chancel, transepts and nave N wall were built, making the whole church much wider. The medieval tower was repaired in 1856, and its top stage and parapet were removed in 1871. In 1874-5, the tower was demolished and the nave extended westwards to the line of its former W wall. The present SW tower was also built at this time. The church was restored in 1926. It was reordered and subdivided internally in the 1980s.

REASONS FOR DESIGNATION
The church of St Helen, Ipswich, is designated at Grade II for the following principal reasons:
* For it's surviving late medieval fabric.
* For the evidence of subsequent phases of alteration.
* For its importance as a long-established place of worship.