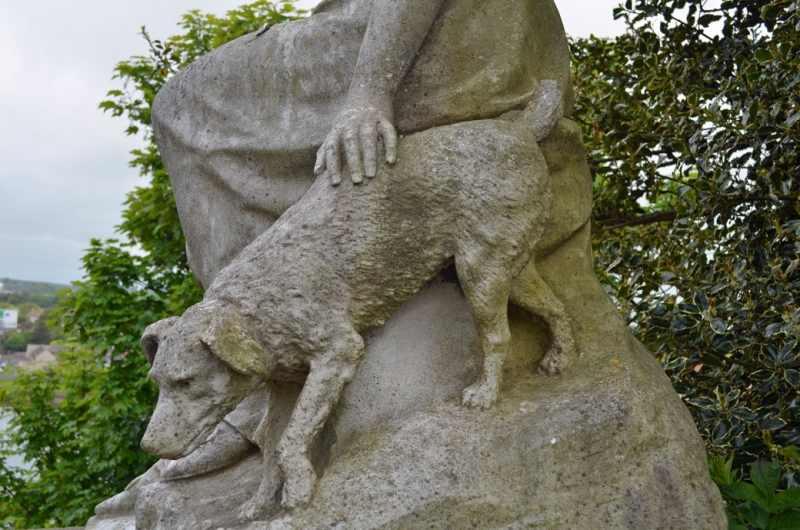 MATERIALS: white marble statue on a grey granite base.

DESCRIPTION: situated within the scheduled medieval and post-medieval fortifications at Berwick upon Tweed (National Heritage List for England: 1015968), in an elevated position above the River Tweed. A life-size statue comprising a seated female with two dogs set upon a tapering rusticated base. The woman is resting on a rock. She wears simplified Edwardian dress and has a single rose pinned to her chest. There are two dogs at her side, the largest looking up at her with its paw resting on her knee, and the smallest at her side with her hand resting on its back.

The front face bears the inscription in black lead letters: ANNIE/LADY JERNINGHAM/OF LONGRIDGE TOWERS, BERWICK UPON TWEED/ OBIT 9 OCT. 1902/PRESENTED TO THE TOWN OF BERWICK UPON TWEED BY/ SIR HUBERT JERNINGHAM, K.C.M.G./LATE AND LAST MEMBER FOR THE BOROUGH. The north face has a metal panel with raised lettering reading: THIS MEMORIAL WAS OFFERED TO AND ACCEPTED BY /THE TOWN COUNCIL/OF BERWICK UPON TWEED. / 1903/ G.F. STEVEN, ESQ, MAYOR/ G WEATHERSTON ESQ, SHERIFF/ AND ERECTED /1908, FRANK EDMINSON ESQ MAYOR/ JAMES LESLIE ESQ SHERIFF. A metal panel on the south face reads: YET IN THESE EARS TILL HEARING DIES/ONE SLOW BELL WILL SEEM TO TOLL/THE PASSING OF THE SWEETEST SOUL/THAT EVER LOOKED WITH HUMAN EYES/TENNYSON: IN MEMORIAM. The rear of the statue base reads: DESIGNED BY HUBERT JERNINGHAM 1903/ SKETCHED BY WALTER INGRAM 1904/EXECUTED BY O. P. PENACHINI 1906.

Annie, Lady Jerningham (1850-1902) was married to first Charles Mather of Longridge Towers, Berwick and then to Hubert Jerningham, a British diplomat and Member of Parliament for Berwick (1881-1885). The latter became Governor of Mauritius, then Trinidad and Tobago, and was knighted for services in a cyclone in Trinidad and Tobago. Lady Jerningham died on 9 October 1902, and her death was marked locally by the closing of shops and the lowering of blinds. Sir Hubert designed the monument in commemoration of his late wife with drawings by sculptor Walter Ingram. The latter of London and Brussels, had 38 exhibits at the Royal Academy between 1862 and 1894 (portrait busts). He died before completion, and the statue was sculpted by O P Pennacchini in Ealing, London, who exhibited once at the Royal Academy. It was erected in Berwick in 1908 on a spot where at certain times of the year it could be seen from the subject's and Sir Hubert's home at Longridge Towers. At its unveiling the Mayor of Berwick spoke of Lady Jerningham's philanthropy: 'Generous and kindly she ever was'.

This statue to Lady Jerningham, erected 1908, is listed at Grade II for the following principal reasons:

* a fine and life-like composition of a seated female and two dogs in white marble, by known sculptors;
* a life-size monument of high aesthetic quality in scale and detailing and which displays considerable sculptural merit;
* it occupies its original location, visible from the subject's home, where it forms a prominent public work of art.

* it benefits from a spatial group value with a number of listed buildings and the scheduled remains of the medieval and post-medieval fortifications of Berwick upon Tweed.