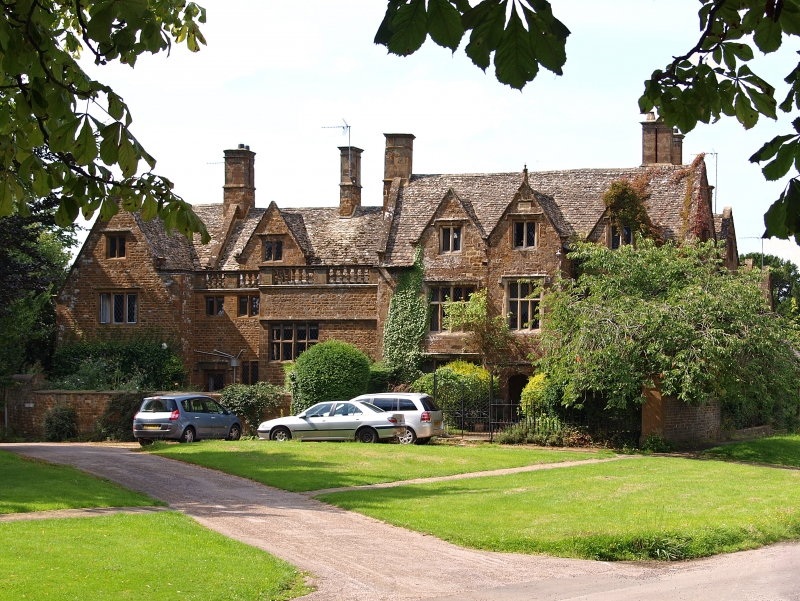 GV II
Substantial house. 1656 on datestone, restored and extended C19/early C20.
Coursed squared marlstone with ashlar dressings; Stonesfield-slate roofs with
ashlar stacks. L-plan with complex extensions. 2 storeys plus attic. Main range
has a symmetrical 5-gabled front, the middle bay projecting as a porch entered
by a Tudor-arched doorway with recessed spandrels and a label, and sheltering a
plainer Tudor-arched doorway; the large 3- and 4-light stone-mullioned windows
with transoms at ground and first floors are restorations, but the 2-light
mullioned gable windows are at least partly C17. The main part of the rear wing,
returning on the right, has two 3-light stone-mullioned windows at ground and
first floors, and has 2-light mullioned windows in the main gable and in a stone
gable to right of it; all, like the front windows, have lattice glazing and
labels; but they are probably C17. The gables all have parapets with projecting
moulded kneelers, and the porch gable bears a stone finial and contains the
datestone. A chamfered plinth containing mullioned cellar windows continues to a
lower 7-window section of the rear wing which has, at ground floor,
ovolo-moulded stone-mullioned windows of 2 and 3 lights, probably lowered but
partly C17, but at first floor has C19 mullioned windows in contemporary
half-dormer gables; a single-storey range beyond it (Rookery Nook), also with
the same plinth, is probably also partly C17 but has three 2-light C19 mullioned
windows plus plain openings to rear. Complex extensions to left of main range
(Elton House) are in similar stone-mullioned and gabled style, but are irregular
and have flat-roofed front projections with stone-balustraded parapets; the
range is mostly early-C20, but it incorporates a Cl7 range of which some
ovolo-moulded mullioned windows at the rear may form part. The rear of The
Rookery appears to retain little original work and is largely masked by early
c20 extensions. Interior: The Rookery has some stop-chamfered beams, a
Tudor-arched chamfered stone fireplace (probably re-set) and 2 fragmentary
drawings on plaster. Elton House has a similar fireplace plus a fine moulded
Tudor-arched fireplace with recessed spandrels (both probably re-used).
Alterations of 1912 are by A.C. Martin of London.
(Buildings of England: Oxfordshire: p418; VCH: Oxfordshire: Vol IX, p10; Country
Life 1949, Vol 105, p33)