The Nuffield Institute for Medical Research the Radcliffe Observatory 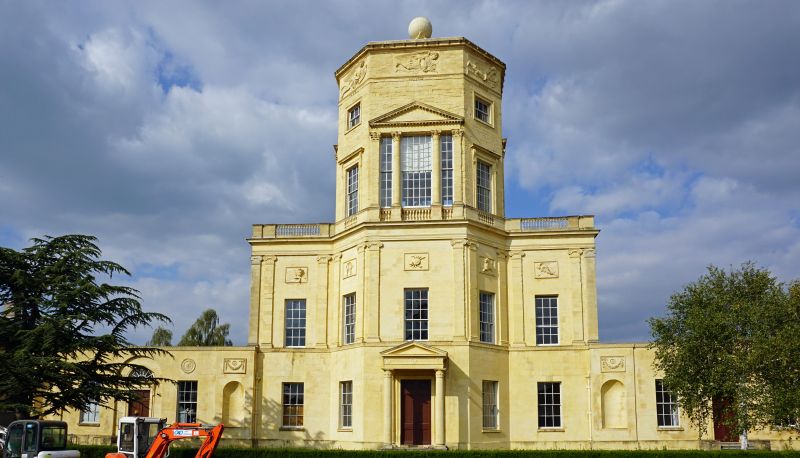 WOODSTOCK ROAD
1.
1485
(West Side)
The Radcliffe Observatory
(Now the Nuffield Institute
for Medical Research)
SP 5007 SE 2/100 12.1.54.
I
2.
Built to the designs of Henry Keene from the benefaction of Dr John Radcliffe
in "a calm and retired locality". The first stone was laid June 27, 1772
but in consequence of Keene's death the whole was not completed until 1795.
The dwellinghouse, the 2 wings and the central part up as far as the platform
were built of Headington Stone before Keene's death in 1776. James Wyatt,
who succeeded Keene as architect, altered some of the external parts and
raised the upper octagon building, basing it on the design of the Tower of
the Winds; James Pears, of Oxford, was the contractor. The front extends
175 feet, each of the wings being 69 feet long and the top of
the tower is about 106 feet from the ground. The 3rd storey consists of
the octagonal tower, with 8 sculptures of the winds on the entablature and
a large globe supported by bronze figures of Hercules and Atlas at the top,
executed by John Bacon, RA (DNB). The bas reliefs, under the platform, represent
the signs of the zodiac and the rising moon and setting sun and were modelled
in Coade stone by Rossi, RA (DNB). The interior has contemporary and notable
fittings including furniture designed by Wyatt. A curved covered way on the
ground floor joins the East wing of the Observatory with the dwelling house
on the East (see Oxf His Soc. XLI (1901) 319).