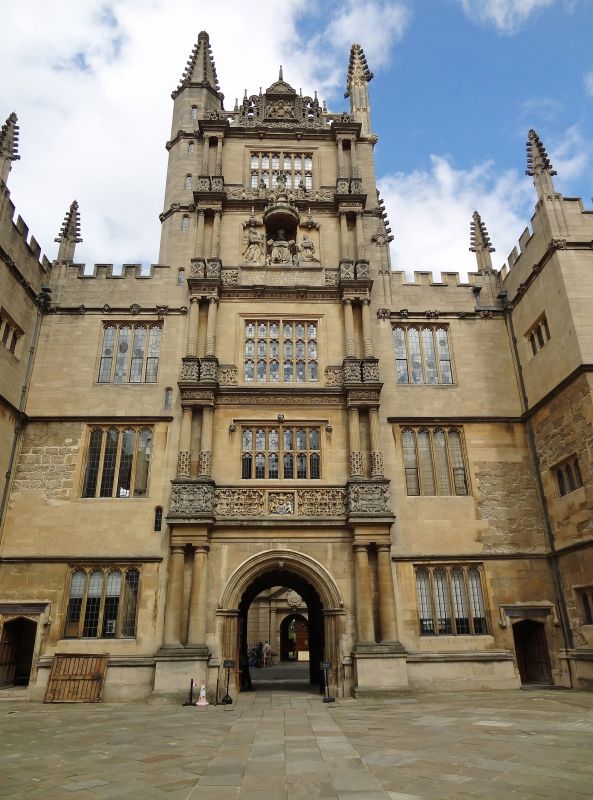 Entry Name: Bodleian Library and Schools Quadrangle Including the Divinity School and the Convocation House

RADCLIFFE SQUARE
1.
1485
The Schools
Bodleian Library
and Schools Quadrangle
including the Divinity
School and Convocation
House
SP 5106 SE 9/147 12.1.54.
I GV
2.
RCHM 1. (1) Divinity School built 1424-1490. The master-masons were Richard
Winchcombe in 1429 and Thomas Elkyn in 1439. The fan-vaulting was constructed
in 1480-3, William Orchard being the master-mason, William Byrd was paid
for the insertion of the North doorway in 1669. The upper storey was added
by 1489 as Duke Humphrey's Library; It was restored and altered 1598-1602.
The whole building was partially restored, again using Headington stone,
in 1660 and also repaired in 1701-2. (For the sculptures of the vault, see
Arch. Jnl LXXX (1914), 227.
(2) The Schools Quadrangle. The West range, built 1610-12, contains the
Arts End of the library on the upper storey and the Proscholium on the ground
floor. The other three ranges were built 1613-24, John Akroyd and John and
Michael Bently, being master-masons. Built originally in Headington freestone.
Extensive restorations made in 1878-85 in Clipsham stone to the upper storey,
pinnacles and the whole tower of the Five Orders. Further refacing of the
interior, of the quadrangle on the South made in 1949.
(3) The West cross-wing was built 1634-6 and its West window rebuilt in
1877. The upper storey forms the Selden End of the library and the lower
storey contains the Convocation House and the Chancellor's Court.

All the buildings in Radcliffe Square form a group of the highest importance
being the centre of the University of Oxford.