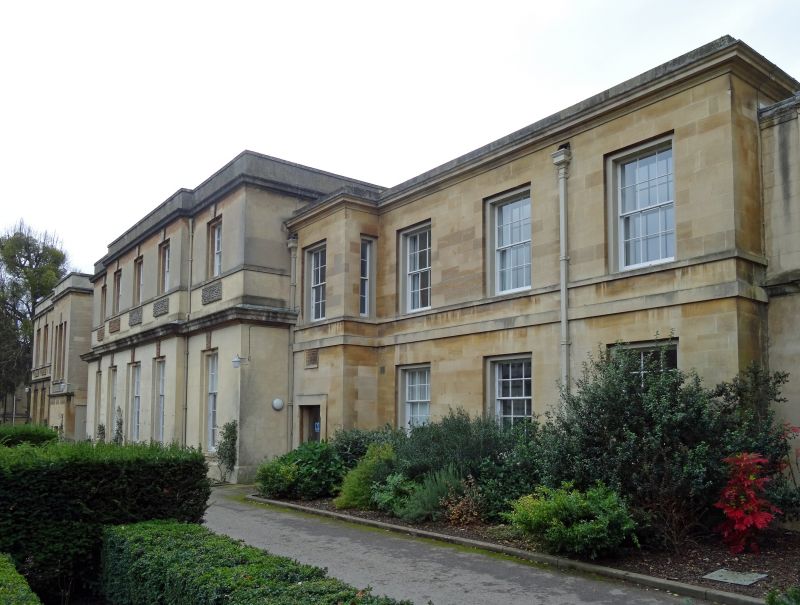 HIGH STREET
1.
1485
(South Side)
Botanic Gardens
The west block
SP 5206 SW 10/424 l2.l.54. west block
II GV
2.
The West Block retains in its centre the western-most orangery, originally
of one storey and built by Townesend in 1733-5; it was later raised by one
storey (? c.186l). To the east and west of this original nucleus were built
the Vines Wing, the Daubeny Laboratory and the Manley Laboratory. The whole
South elevation now shews a homogeneous whole (and has been graded II to
preserve the Townesend part in particular) but the frontage is broken by
the additions.
(a) The Vines Wing of 1910. 2-storeyed ashlar on the South in style similar
to the Townesend building. On the North elevation is a moulded band at the
lst floor, moulded cornice and a small parapet. 3 1st floor sash windows
with rusticated keystones and plain recessed reveals; below each is a rusticated
rectangular raised panel. The West part breaks forward and has a plain doorway
with 2 sash windows on each side, and in the 1st floor is a 3-light sash
window in a recessed frame with a rusticated keystone.
(b) The Daubeny Laboratory built in 1848, has as its nucleus in the centre,
the western most one-storeyed orangery built by Townesend. The south elevation
follows Townesend's design and consists of two storeyed ashlar with a moulded
cornice at the 1st floor and a parapet with a moulded cornice below it.
At the 1st floor level are rectangular rusticated panels. The North elevation
is of 2-storeyed ashlar and a parapet. 5 sash windows, the centre 3 breaking
forward in plain reveals with rusticated keystones below each window in the
1st floor are rectangular rusticated panels.
(c) The Manlev Laboratory, 1902. The South elevation follows the other
two ranges on the east; the 1st floor was added in 1932. The North elevation
is 2-storeyed plain ashlar with a moulded band at the 1st floor, moulded
eaves cornice, small parapet and 2-light casement windows.

All the listed buildings on the South Side form a group.