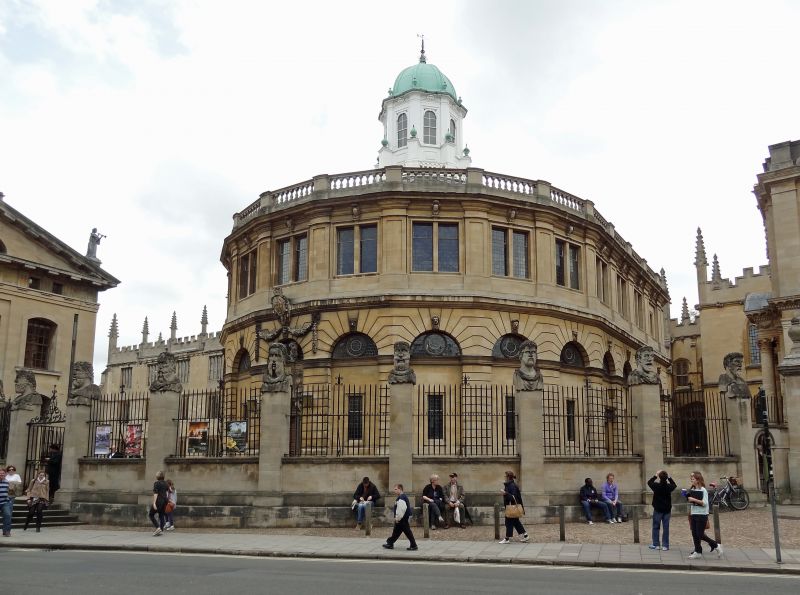 1. BROAD STREET
1485
(South Side)
The Sheldonian Theatre
SP 5106 SE 9/148 12.1.54.
I GV
2.
RCHM 2. Built in 1664-69 at the cost of Archbishop Seldon to the designs
of Wren. Thomas Robinson was master-mason with Arthur Frogley, master-
carpenter. The stone used came from Headington (the ground storeys,) Burford
and Barrington, while the upper stages were built in Taynton Stone. The whole
South elevation is in original Barrington stone in the upper stage with Windrud
stone in the lower stage. The upper stage of the semi- circular North elevation
was refaced in Bath stone, probably in 1838, and since partly refaced in
Clipsham stone. The cornices and balustrades have also been repaired in
Clipsham stone at various times. The originai stone-carving was by William
Byrd and the wood-work by William and Richard Clere. The ceiling was painted
by Robert Streater; an early example of English illusionist decoration.

Exeter College, The Old Ashmolean Building, The Sheldonian Theatre and The
Old Clarendon Building form a group with The Indian Institute, Catte Street.