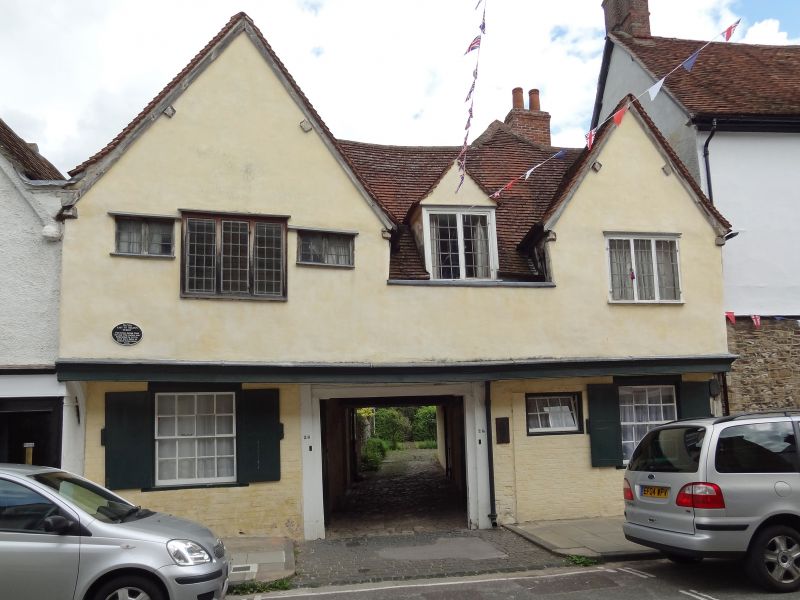 Shall be replaced by:-

GV II*
House. Circa 1430 [tree-ring dates 1428-31]; altered circa late C16 or early C17 and
Late C18 or early C19. Plastered timber-framing, brick and stone. Plain tile roof.
Brick axial stacks. PLAN: Hall house with cross-wings jettied into the open hall and
jettied at front. The cross-wings project at the rear and were connected by a gallery
at first floor level behind the hall. A floor was inserted into the open hall in circa late
C16 or early C17. The north cross-wing was rebuilt and a carriageway made through
the ground storey of the hall in about late C18 or early C19. EXTERIOR: 2 storeys.
First floorjettied; 3 bays with gables to left and right [left gable wider] with moulded
wooden bressumer on brackets and C20 casements with leaded panes, the left flanked
by small lights. On the returns of the right-hand gable there are cusped tracery
wooden lights. At centre a gabled dormer. Ground floor has carriageway to left of
centre, 16-pane sash on left and right with shutters and small 8-pane window
immediately to right of carriageway. At the rear gallery over central carriageway with
twelve lights of gallery window exposed with cusped tracery; south wing on left
jettied on inner north side; wing on right built of stone rubble. INTERIOR: The
wings and the hall have roofs with cambered collars and arch bracing below and
wind-braces; the two trusses of the hall were filled with wattle and daub to direct
smoke from the open hearth to the louvre above. Panelled ceiling in ground floor
room at rear of south wing; chamber above has circa mid C16 wall painting on west
and south walls consisting of red and white vertical stripes and a bold floral design.
Stone fireplaces. SOURCE: Oxford Archaeological Unit Report, February 1995.