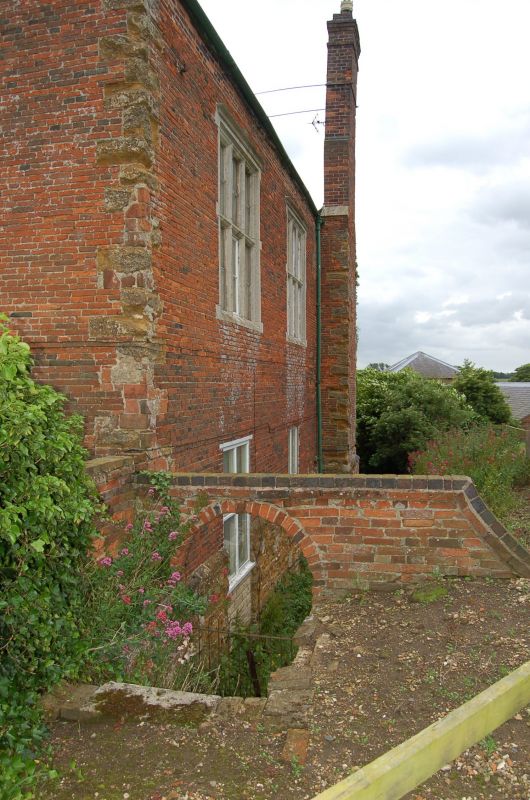 House. Mid C17, altered later C17. Red brick with stone quoins and dressings.
and Welsh and Swithland slate roofs with brick end stacks, that on facing
gable projecting. Further projecting stack on right side facing Church.
Stone coped shouldered gables with kneelers. 3 ranges 1 storey to left,
2nd 2 storey span behind and cross wing on right which is the main range.
Gable of this range facing, main facade is rear gable. 2½ storeys and basement
of 2 6/6 sash windows in moulded stone frames with keystones. 2 similar windows
in gable, the left a 2-light casement, the right blocked. 2 basement windows,
the left blocked. To right of this, in coursed squared stone, the 2 storey
range of a blocked window and a 6/6 sash in stone frame. On ground floor
a wooden doorcase with fluted jambs and flat bracketted canopy. 6-panelled
door, the upper 4 panels glazed. To right a 3-light window with centre sash.
Brick ornamental end stack. The 1 storey range behind has C20 tile roof and
ridge stack. Side of wing facing Church has 2 1st floor 3-light stone mullion
and transom windows, with hood moulds. 2 2/2 sashes below. To right the
projecting stack with stone quoins, and further right a blocked window. The
facing gable on entrance side has a similar stack and a 2-light horizontal
sliding sash in gable. Inside is a fine later C17 oak well staircase, some
of the newels with open work diamonds on top and octagonal balls beneath,
others continuous. There are also moulded chamfered beams and 2- and 6-panelled
doors. Pevsner.