A Grade I Listed Building in Silk Willoughby, Lincolnshire 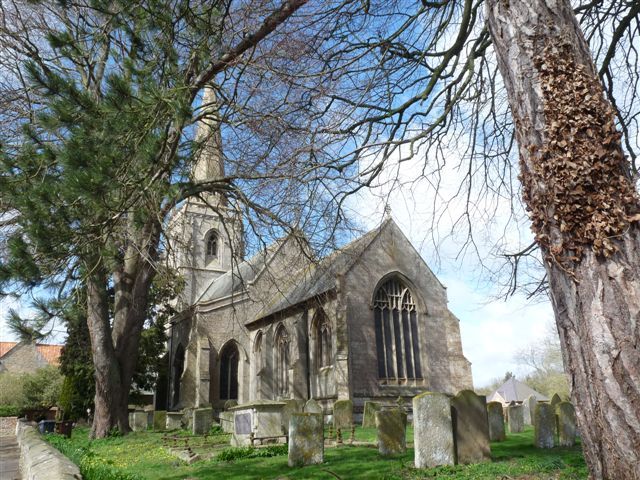 Parish church. C12, C14, C15, C16, chancel rebuilt 1878, restored 1907-8.
Some coursed limestone rubble, ashlar, leaded and slate roofs. Nave,
chancel, north and south aisles, west tower and spire, south porch. Tall 2
stage west tower with chamfered plinth, stepped and gabled buttresses,
carved flowing openwork parapet, angle pinnacles and fleuron frieze. Set
back spire with 2 tiers of gabled lucarnes in alternating directions. In
the belfry stage are 2 light cusped traceried bell openings with moulded
and shafted pointcd surrounds and hollow moulded hoods. The west window is
of 2 lights with cusped flowing tracery to the head. In the west end of the
south aisle is a 2 light C14 window with reticulated tracery to the head
and a chamfered pointed surround. In the west wall of the north aisle is an
early C14 Y-traceried 2 light window, also with a chamfered surround. In
the north wall of the aisle are 2 late C14 3 light windows with cusped
flowing tracery and deeply chamfered pointed surrounds. Between them is a
wide C16 window of 5 stepped lights with 4 centred arched heads and a
triangular hollow chamfered surround. The cushion capitals of a blocked
early C12 doorway can be seen beneath this window. The 1878 chancel has a
chamfered plinth and stepped buttresses. In the side walls are pairs of
tall Perpendicular style windows of 3 lights with moulded surrounds and on
the north is a smaller matching additional window. The east window is of 5
lights and also has panel tracery to the head. The early C14 south aisle
has a 2 light reticulated traceried window to the east and on the south are
2 matching 3 light windows, all with pointed chamfered surrounds. The
gabled C14 south porch has a filleted engaged triple shafted outer arch,
side benches and an octagonal base for a pillar piscina. The early C14
inner doorway has a moulded and pointed head with 2 orders of ballflowers
to the head which has human head stops. The door itself has raised muntins
and bears the date 1690. Interior: The tall 3 bay C14 nave arcades have
filleted quatrefoil piers, annular capitals and double chamfered arches.
The C14 tower arch matches with triple responds and a triple chamfered
arched head. The chancel arch has shafted and filleted reveals, annular
imposts and a double chamfered arched head. To the north is an ogee headed
doorway to the rood loft, the upper doorway of which has a segmental head.
To the south of the chancel arch is a cusped ogee headed statue niche.
There are traces of red paint on the eastern parts of the nave walls. In
the south aisle is a cusped ogee headed piscina and a double aumbry with
beaten copper Art Nouveau plaques of vines to the oak doors. In the north
aisle are extensive traces of a scheme of wall paintings in red, black,
blue and yellow depicting mounted knights wearing surcoats and closed
helms. In the chancel is a reset C14 triple sedilia with cusped ogee
arches to the openings, moulded shafts, quatrefoil base panel and fleuroned
false vaults to the compartments. Above is a brattished cornice. The lower
panels also have blank cusped tracery and some red and blue paint. Early
C17 octagonal pulpit has blank round headed panels to the sides with
guilloche decoration and swags to the base. A fine set of C14 poppyhead
benchends with blank cusped traceried panels containing trefoils and
quatrefoils. Early C12 round tub font with 2 strand cabled interlacing
blank arcading and cushion capitals, C20 carved wooden lid. In the south
aisle is a limestone wall plaque to Joseph Clifton, d. 1806, with oval
inscription panel and rectangular surround having gadrooned base, fluted
frieze and segmental pediment with flanking paterae.