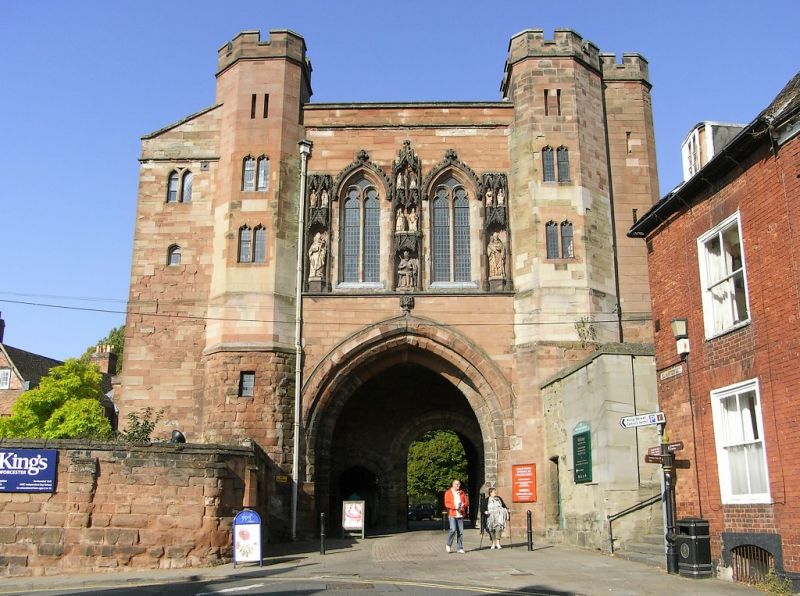 Gatehouse. Begun c1300-35 and completed after licence to
crenellate had been obtained in 1368-9. Restored C19. Probably
originally the entrance to the castle. Coursed red sandstone
with concealed roof. Single storey over arched gateway of 2
bays and with embattled octagonal tower set into each corner.
West front: central wide, 4-centred arch with continuous
double chamfers and ogeed hoodmould surmounted by renewed
canopied niches between two 2-light trefoil-headed windows
with crocketed hoodmoulds. Further small trefoil light at
left. Towers are off-set to each stage and have first and
second stage chamfered bands and moulded cornice; slits to
upper stage and blocked 2-light window and blocked lancet to
north-west. To south-west a semi-circular window in lower
stage. East facade: similar, with triple-chamfered arch and
renewed hoodmould with renewed canopied niches and tabernacle
work with renewed figures of kings, queens and bishops. Towers
have paired ogeed lights. Outer walls have paired lights to
upper stage with Y-tracery at left and slits at right.
INTERIOR: divided into 2 bays by a cross wall with carriage
and pedestrian arches: round-arched gateway with triple
chamfer to head and battened timber double doors; then smaller
arch with double chamfer to head and similar single door. The
inner vault has diagonal and ridge-ribs, the outer has
liernes; vaults on slender columns. Pointed-arched plank doors
lead to upper stages, that to north renewed. The upper floor
noted as having rib-vault to landing and two turret rooms with
small rib-vaults. To main upper room a small doorway with
shouldered lintel, the shoulders being double-curved.
Abuts the monastic precinct wall (Scheduled Ancient Monument).
Sections of the Monastery Wall running to the N. and S. of the
Water Gate (qv) are also listed.
All the listed buildings in College Green are part of a
significant group forming the setting for Worcester Cathedral
(qv) to the north side.
(The Buildings of England: Pevsner: N: Worcestershire:
Harmondsworth: 1968-1985: 316).