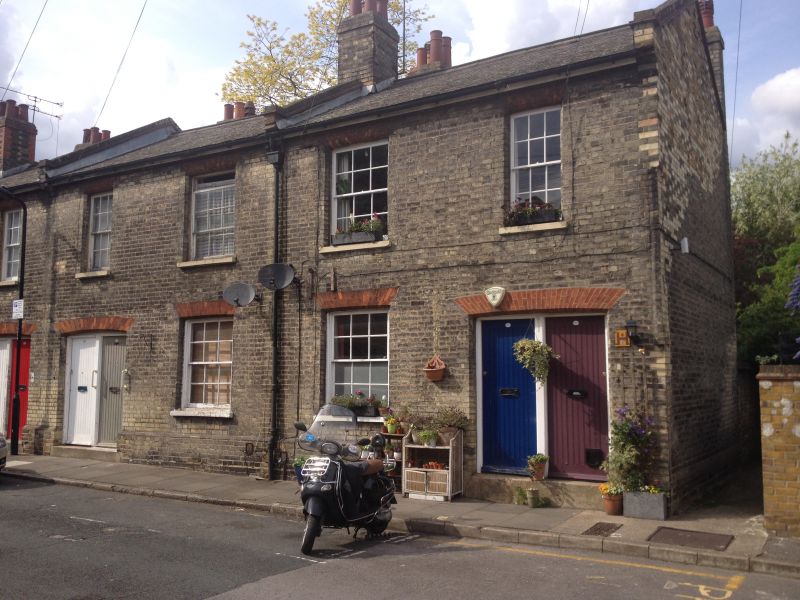 Victoria Cottages, 7-20 Deal St. Development of artisans' dwellings. 1864 for the Metropolitan Association for Improving the Dwellings of the Industrious Classes. Probably designed by Henry Roberts (1803-1876). Development of fourteen terrace houses, each sub-divided into two units.
PLAN: rectangular plots with wings to rear, one dwelling per floor, originally comprising three rooms with sanitary facilities.
EXTERIORS: Stock brick, red brick door and window surrounds, slate roofs. In general, the two-storey houses comprise two-window fronts with shallow brick arches over the double doors; red brick arches over the ground floor windows. 6/6-pane sashes. 131-145 Woodseer St consists of a terrace of four double dwellings. 7-20 Victoria Cottages consists of an L-shaped row of double dwellings, reached from the pavement that runs between the two rows. 14-22 Deal Street consists of a row of three double dwellings, contiguous with the west flank of Victoria Cottages.
INTERIORS: not inspected, believed to be considerably altered.
HISTORY: the Metropolitan Association purchased the site of Victoria and Albert Cottages [q.v.] in 1850; the latter were built in 1857-58, and were followed by Victoria Cottages in 1864, on the site of what had formerly been called Pleasant Row. These small cottages, of a kind more commonly found in the north of England, were intended for artisan families unable to afford the higher rents of the larger family units in those dwellings that were beginning to be built by philanthropic housing bodies at this time. Their low-rise low density was criticised by their architect, no less, at the time of construction but they now afford a rare insight into the sort of cottage accommodation once common, but now scarce, in the East End. The western end of the southern row suffered from bomb damage and is excluded from the listing. The houses underwent major refurbishment in the late 1970s by the Newlon Housing Trust.