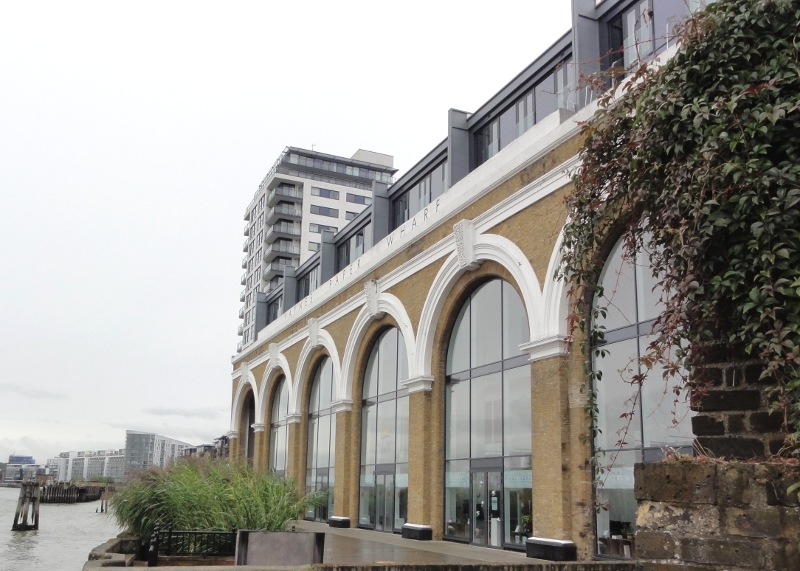 Marine boiler factory, currently used for paper storage. Front part of c.1860 in Italianate style, rear part probably 1880s, and is shown on Stanford's map of 1891. Built for J Penn and Sons marine engineers. Front part of stock brick in Flemish bond with painted stone dressings. River front has moulded cornice and six giant arches with rusticated keystones, moulded impost blocks and pilasters. The arches are currently boarded up but mid C20 photographs show wooden Diocletian windows above the impost blocks and brick lower sections with metal C20 shutter-fronted openings. Side elevation has two bays with cornice, pilaster and imposts block. Two cambered openings on two floors but all are blocked except for the first floor left opening with later C19 metal-framed casement. Remainder of the building also in stock brick but English bond. Side elevation of two storeys, fifteen windows, metal casements, ground floor openings blocked. The rear elevation has four painted gables with eight cambered casements and a left side hoist flanked by side windows to the first floor and there are large blocked openings to the ground floor.
HISTORY: The engine of the world's first ironclad HMS Warrior was fitted here and also the engines of the early Dreadnought battleships. Production ceased in 1911.