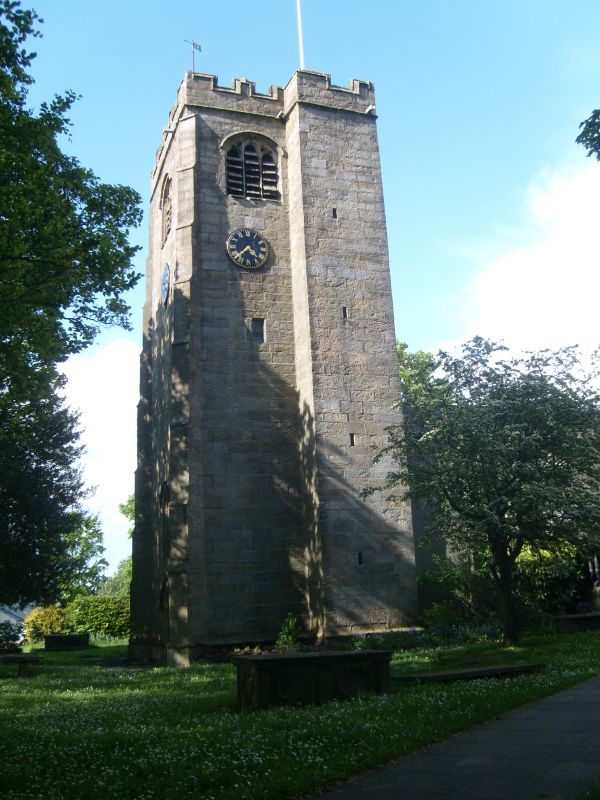 Church, with late C15th tower and nave arcade, nave of 1813 and chancel
of 1846. Rubble with south nave wall pebbledashed, sandstone ashlar
tower and slate roof. Comprises a nave, north aisle widened in 1880,
lower chancel, timbered south porch of 1880, and west tower. Tower of
3 stages with diagonal buttresses and battlemented parapet. Bell
openings of 3 pointed lights under a 4-centred head with hood mould.
Over the west door is a similar window. The west doorway, of 2 hollow-
chamfered orders, has a 2-centred head and hood. The south nave wall has
windows dating from the 1880 restoration with perpendicular tracery of
various descriptions. Interior has 5-bay arcade to nave and chancel
with octagonal piers and arches of 2 chamfered orders. Nave has a hammer-
beam roof with king posts, the chancel having scissor-braced rafters and
collars. Between the chancel and its aisle is a sandstone memorial to
Robert Cole (died 1642) with coat of arms and inscription 'It is supposed
that he lived above 100 years'.