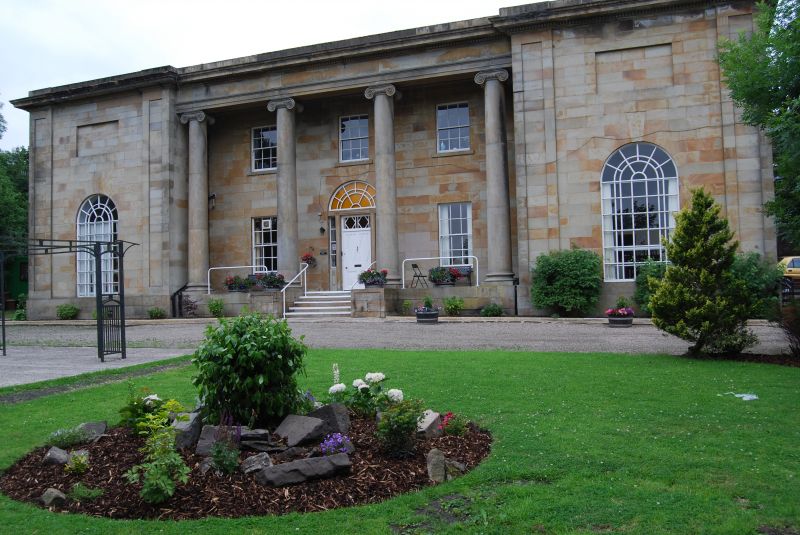 II*
Large house, probably by John Foster of Liverpool c. 1828 (Pevsner):
now partially restored but derelict. Ashlar, with hipped tiled roof
(now no chimneys). T-plan: front block 5x3 bays with rear service
wing 3x3 bays. Two-storey front, 3-storey rear wing to same height
(plus cellars). In Neo-classical style. Symmetrical, 3-bay centre
recessed behind 4 giant Ionic columns on a plinth broken in the centre
by steps to doorway which has large fanlight with radiating glazing
bars; 2 sashed windows at ground floor and 3 smaller ones above
(some damaged); each flanking wing has a large round-headed window at
ground floor (radiating glazing bars in head of that on left, otherwise
glazing now missing), and a horizontal rectangular panel at 1st floor.
Prominent cornice and low parapet continued on return walls. Three-bay
return walls have tall windows at ground floor, shorter ones at 1st
floor, those on the right restored with glazing bars. Side walls of
rear wing have 3 windows each floor all restored with glazing bars
(the topmost only 6 panes), rear wall has pedimented centre breaking
forwards slightly with a large segmental-headed tripartite window at
ground floor and one window at 2nd floor and the flanking bays have
ground floor doors and windows above matching those of the sides.
Interior: gutted, but elements of some features remain, principally the
saucer-domed entrance hall with curved triangular pendentives (fragments of
moulded plaster, e.g. Greek key frieze to dome), segmental arch to hall and
stairwell, cantilevered stone imperial staircase of one flight and then
two(balusters missing); lath framework for segmental coved ceiling in
right wing.