A Grade I Listed Building in Burley, Rutland 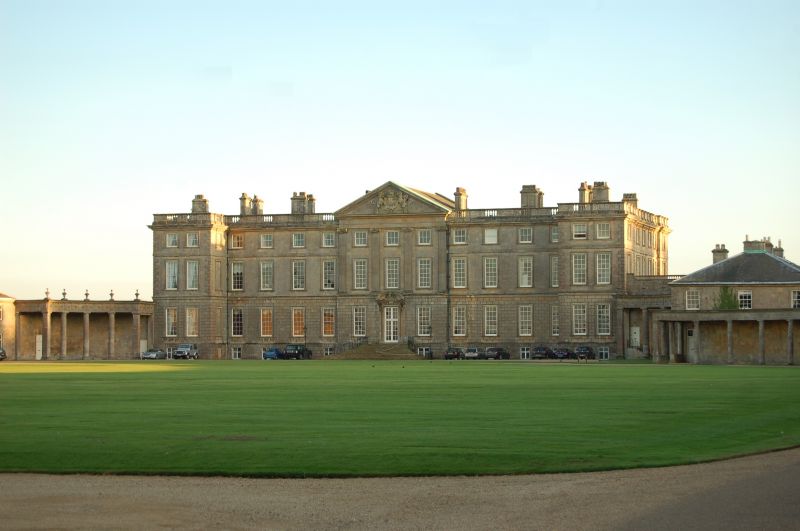 SK 81 SE BURLEY
3/8 Burley on the Hill:
House, with wings,
stables and collonades

Large country house, 1694 - 1705,formerly a hospital built for Daniel Finch, 2nd Earl
of Nottingham to replace a former house built by the 1st Duke of Buckingham and fired in
the Civil War. The stable block of the earlier house survived and was
incorporated into the new composition, possibly influencing its scale, by
its distance from the house itself. Although various names are mentioned
in connection with the work, notably that of John Lumley, it now seems
probable that the Duke of Nottingham was his own architect, and that Lumley
was only one of a number of surveyors/master masons. House, pavillions
and stables, with their connecting collonades, form a single composition,
Baroque in composition, Palladian in detail. The house forms the main
block: faced with ashlar Clipsham stone, 15 bays by 7. Rusticated
basement, and ground floor raised as piano mobile, 1st floor of same height,
lower attic 2nd storey. Cornice and balustrade above. Rusticated angle
quoins, sill courses. Principal elevations are arranged 2-4-3-4-2, with
slightly projecting outer wings. Pedimented central section contains,
on each front, a wide central doorway with lugged architrave, carved
consoles, and foliate frieze, curved broken pediment with monogram and
coronet, approached by a wide curving flight of steps with fine wrought-iron
balustrade. Above this, 4 engaged Corinthian columns span the 1st and 2nd
storeys below the pediment, which contains a coat of arms. South front has
additional 1 storey corridor of 8 bays, with rusticated basement and
cornice, recessed to the left.

Side elevations of 7 bays, 1-5-1, outir bays slightly projecting, and
doorway raised up double flight of curving steps with wrought-iron balustrade.
Basement windows throughout have voussoirs and keystones, all other openings
have moulded architraves. All windows are sashes with glazing bars.

On the north, short quadrant collonades of 4 bays with Tuscan columns,
triglyph and rosette frieze, and a cornice bearing urns, link the house with
its flanking pavillions. Each of these is ashlar faced with angle quoins
and hipped slate roof. 2 storeys, 7 bays. Central door in plain
architrave with moulded cornice above, wood mullion and transom windows,
with plain architraves, and voussoirs to ground floor openings. A short
4-bay collonade continues the line of these pavillions, and leads into the
grandiose main collonade, which sweeps the composition outwards in a
curving 13 bays of Tuscan columns, with plain triglyph frieze. All piers
have a marked entasis. This line is terminated by the stable blocks.
That to the east survives from Buckingham's house, remaining almost as
built, though modified after a fire in 1705, and now lacking its original
pedimented gables. Coursed rubble, with hipped slate roof. 2 storeys,
13 bays, 3-7-3, with central door in round-arched opening with massively
expressed voussoirs and keystone. Wood mullion and transom windows with
architraves. String course, and moulded stone eaves cornice. The western
block mimics this exactly, but is of less depth.

Inside the house, much was gutted by fire in 1908, though subsequently
reconstructed. There are a number of fine wood and plaster panelled
rooms, notably the saloon and the small drawing room. The dining room
has a screen of detached columns at either end and exquisite plaster
ceiling and wall panels in the style of Adam, but restored following the fire.

BURLEY
Burley on the Hill:
House, with wings,
stables and collonades
continuation

The book room has been formed from fine cases salvaged from the former
library. The large entrance hall has a pedimented doorway in the saloon,
and left of it, is the staircase hall. The staircase is early C18,
cantilevered wood openstring stair with turned balusters and carved risers.
The walls and ceiling have paintings by Lanscroon of 1708-12, darkly
coloured, vigorously moulded classical mythological scenes. Upstairs,
the Ballroom spans the width of the house and rises through 2 storeys, it
is galleried and has fine plasterwork, and woodwork. This room was
formerly also painted, but this was lost in the fire. Throughout the house,
the oak doors and brass door furniture are noteworthy.