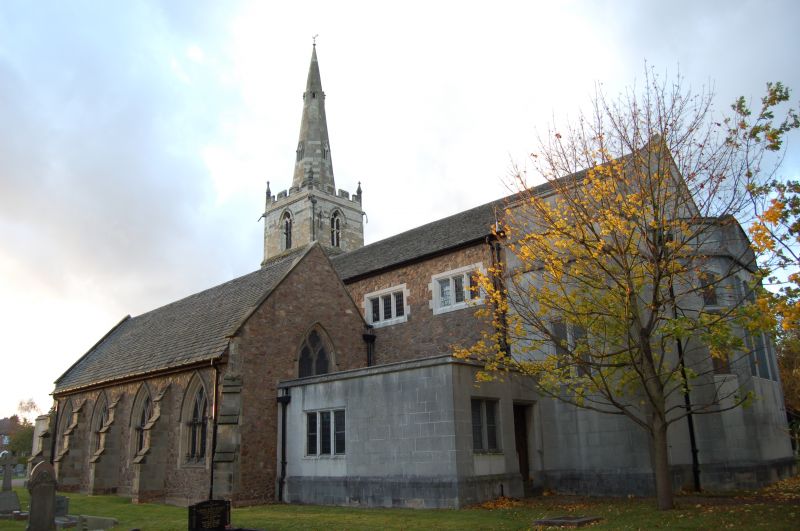 Parish church consisting of north aisle and tower constructed in the C13, C14 and C15, all restored in the C19; south aisle, rebuilt by Ewan Christian in the C19 and again in the C20; and nave with two vestries added in the 1960s.

MATERIALS: The north aisle and tower, the oldest surviving parts of the church, are built of uncoursed rubble with sandstone dressings. Little of the original stonework survived the C19 restorations except for parts of the tower, the lower two stages of which are sandstone ashlar whilst the third stage is white limestone ashlar. The east end of the nave, vestries and west porch, which were all added in1960-62, are constructed in a smooth, pale grey, pre-cast stone. The west end and clerestory, dating from the same period, are constructed of uncoursed sandstone rubble, as is the south aisle which was rebuilt in the C19 using the medieval stone. It is not clear how much of this stonework survived the second rebuilding of the early 1960s. The pitched roofs of the nave and aisles are covered in slates, laid in diminishing courses.

ELEVATIONS: The north elevation of the five-bay north aisle has a gabled porch on the far right, added in 1876, which has an arched doorway with a moulded surround and carved foliage label stops. To the left of this are two flat-headed windows of three-lights with cusped arches, followed by three pointed-arched, two-light windows with cusped ogee heads. Three of the bays are defined by buttresses, and there is a diagonal buttress on the north-east corner, all with off-sets. The three-light, pointed-arched window in the east wall has reticulated tracery. At the west end of the north aisle is the three-stage tower which has a crenellated parapet with corner pinnacles and gargoyles, and a set-back spire with two tiers of lucarnes. The first stage has four string courses and diagonal buttresses with off-sets. The first and second stages have a late-C13, Y-tracery window with mullions circular in section. Above the ball-flower cornice, the third stage has a C14, Perpendicular window of two lights with panel tracery. A trefoil niche in the east wall contains a medieval statue of Mary Magdalene, the patron saint. The C20, gabled east end, which breaks forward from the north aisle, is dominated by a canted bay containing four narrow windows on the front (the outer two mullioned), and one window on each side, all with shallow triangular heads and a single high transom. The south side of the church, from which all the historic phases are visible, presents a somewhat haphazard appearance. There is an abrupt transition between the pre-cast stone of the east end and the uncoursed sandstone of the clerestory which has flat-headed, three-light, mullioned windows with blocked surrounds. Only two bays of the clerestory can be seen as the rebuilt south aisle obscures the rest. At the east end of the aisle is the early 1960s, single-storey, flat-roofed clergy vestry, built in pre-cast stone, which has simple square-headed, mullioned windows of two or three lights. The four-bay elevation of the south aisle has raised coping to the gable ends. The bays are defined by buttresses with off-sets, those at the corners diagonal. In between are four windows with Y-tracery and mullions circular in section. On the west end of the aisle is the early 1960s single-storey, flat-roofed choir vestry, built in pre-cast stone, which continues round to the west front, forming the canted entrance porch. This has a moulded cornice which rises into a shallow gable over the wide-arched, recessed door. Above, in the gable head, is carved an alabaster vase surrounded by tears of penitence, the traditional emblem of Mary Magdalene. In each face of the canted porch is a single-light, rectangular window set in a moulded surround. Behind the porch rises the gabled west end of the nave lit by a shallow-arched, five-light window with slender mullions, except for the two outer ones which are of a greater thickness.

INTERIOR: The west entrance leads through the narthex, added in 2007, into the spacious, four-bay nave which is continuous with the chancel, all built in the early 1960s. The arched roof is divided into eight bays by timber ribs, resting on corbels positioned between the three-light clerestory windows. The choir is situated in the chancel, behind which, on the south side of the sanctuary is the modern piscina and the C14 triple sedilia. The simple, moulded arches have head stops in the form of human heads, the second from the left is medieval, whilst the others date from the C19. A door leads on the south side of the sanctuary to the clergy vestry. The altar is positioned in the canted east bay, the window of which contains an elongated, carved calvary. All the windows, except those in the north aisle, have plain glass; and all the pews and choir stalls, made of afromosia (a West African wood), are modern. The medieval north aisle has a six-bay, queen-post roof with split tie beams clasping the queen struts. It has wind braces and carved bosses on the soffits of the collar beams, and the rafters above the collar beams have cusped apexes. The whole was heavily restored in the C19. The arcade is carried on three circular piers and one octagonal pier, with moulded pointed arches and capitals embellished with small fleurons on all but one. At the east end, on the south side, there is a Tudor arch from the former chancel, and in the stonework of the north wall is a medieval aumbry. The stained glass dates from the Victorian period, with the exception of that in the westernmost window which was added in 1920. The timber roof of the south aisle is a modern, plainer version of that over the north aisle. The arcade, dating to the early 1960s, has pointed, moulded arches and octagonal piers without capitals. The C13, plain, circular font is the oldest object in the church. The C19 pulpit contains medieval open tracery carved in oak, consisting of flowers and acorns with six tiny grotesque heads.

In the C13 the Church of St Mary Magdalene consisted of a small nave and chancel. The west tower was built in the later C13, its higher stage added in the C14, and the spire erected in the early C15. In the mid-C14 the church was enlarged with the addition of a new four-bay nave and chancel on the north side, after which the older part of the church served as the south aisle. The nave and chancel of the mid-C14 phase survive (now the north aisle), with a roof dating to either the C14 or C15. The church was restored in at least two phases of work during the C19. Henry Woodyer made alterations circa 1860 but it is unclear what these were. Woodyer was the first pupil of William Butterfield and has over 130 listed buildings to his name, predominantly churches which he either restored or designed. More is known about the second phase of restoration carried out by Ewan Christian in 1894. Christian, who was Architect to the Ecclesiastical Commission, designed and restored a great number of churches, over 200 of which are listed. At St Mary’s he rebuilt the south aisle, which had been the oldest part of the church. He adopted the same Early English style and used the old stones for facing the exterior walls. The roof of the north aisle was probably altered by Christian as well; it has certainly been heavily restored in the C19. Other Victorian alterations include the addition of the north porch in 1876, and the renewal of the stonework of all the windows in the north wall of the north aisle. Most of the stained glass in these windows was inserted during this period as well. By the early C20 the accommodation had become inadequate for the increased population of the parish. Plans for an enlargement were abandoned following the outbreak of war, and it was not until 1960 that the foundation stone was laid in the new west porch. The architect was the Leicester-based George A. Cole, a worshipper at St Mary’s, who endeavoured to ensure that the extension harmonised with the older parts of the church. The new addition consisted of a much larger nave and chancel which was constructed between the old nave (now the north aisle) and the south aisle. The latter had to be taken down and rebuilt on the south side of the new nave; and the medieval font, sedilia and pulpit were transferred to new positions. The extension was completed in 1962 and was dedicated by the Bishop of Leicester in the same year. The organ pipes were installed either side of the west window in 1968. In 1978 four of the five bells in the tower were removed and replaced with six bells from the disused Church of St Michael, Stamford. Two new bells were also installed, whilst the oldest bell, cast in 1627 by Leicester bell-founder, Hugh Watts, was retained. In 2007 a number of pews were removed from the west end of the nave in order to create a narthex which provides catering and other facilities.

The Church of St Mary Magdalene is designated at Grade II for the following principal reasons:
* Architectural interest: a number of medieval fixtures survive, including a triple sedilia, aumbry, and font; and of particular importance is the medieval statue of Mary Magdalene in the tower, which is a rare survival of the iconoclasm of the Reformation.
* Survival of early fabric: the church has C13 origins, and although it was restored and partly rebuilt in the C19 and extended in the C20, some of its medieval fabric survives.
* Historical Association: C19 works were designed by noted architects Henry Woodyer and Ewan Christian
* Historical interest: the church demonstrates different phases of continuous community use and worship from the C13 to the C21.