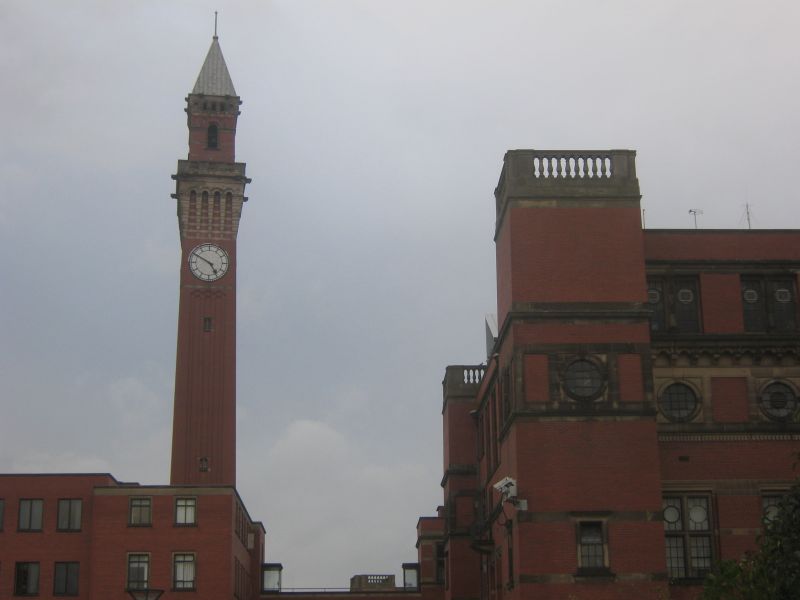 UNIVERSITY ROAD
1.
5104
Edgbaston B15
Great Hall and
Quadrant Range
formerly listed as
Birmingham University
(Main Buildings)
SP 08 SW 11/4 21.1.70
II*
2.
1900-1909 by Sir Aston Webb and Ingress Bell, the D plan group main university
building of which only part were completed to the original design. The Great
Hall opposite the tower is the central axial building, to its front is a square
entrance hall with a giant round arched mullioned window, above an ornate
frieze over the loggia doorways, flanked by tapering square corner turrets
(to rear as well) which are topped by small ribbed domes. Over the hall rises
a low octagonal drum supporting a large ribbed dome and a miniature lantern.
Red brick and stone and buff terracotta dressings, but the conception is more
Byzantine than Renaissance. Behind the domed and galleried entrance hall with
ornate Renaissance grotesque relief carving, lies the Great Hall itself, a
vast tunnel vaulted space with cross vaulted
2 storey side galleries. Rich grotesque carving. Lavish stained glass by
T R Spence. The centrepiece of the hall has 2 storey quadrant links forming
the wing pavilions, 2 to the west but only one completed to the east. These
relate on a smaller 2 storey scale to the Great Hall being square on plan and
with similar ribbed domes but with round corner turrets, wings extending
behind. Flat lintelled window ranges on ground floor and large frescoed
friezes by Anning Bell below the parapets on the first floor level. The link
ranges have segmental arched windows. Modern part to east not of special interest.