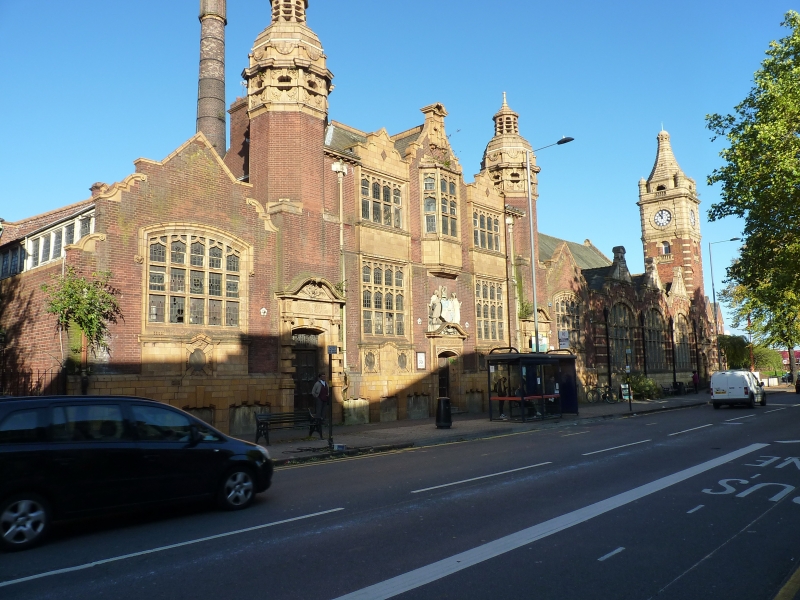 The Free Library opened in 1895, designed by Jethro A. Cossins and Peacock. The Baths were added to the south and opened in 1907 by William Hale and Son, Architect, with Job Cox as Superintendant Engineer and W. & J. Webb as the builders. Red brick with terracotta dressings and slate roof.

The LIBRARY consists of a large hall flanked to the north by a prominent entrance tower.

EXTERIOR: Flemish and Renaissance details combined with some Arts and Crafts motifs, all lavishly executed in buff terracotta contrasted with red brick walls. Deep terracotta plinth carried up to level of three great hall windows with mullioned and double transomed depressed arch lights (leaded with good decorative work to heads). These windows are contained in terracotta banded pier arcade with inner arch in moulded terracotta, spaced terracotta voussoirs carried into brick outer arch. Above the windows the parapeted wall head is raised in terracotta shaped gables with segmental pedimented aedicule niches. Flemish Renaissance doorway at foot of tower with banded bulbous columns, curvilinear terracotta gable-pediment swept above entablature to relief plaque of city arms. The tower rising above has curved chamfer corners with terracotta banding, the crowning clock stage and dome pinnacled short swept spire is entirely terracotta faced with banding, pilasters, cornice and balustraded niches, the spire capped by a miniature cupola. A rich, carefully balanced design, the subtly varied scale within the overall composition highlighted in the small extension with side entrance to the right of the main entrance and in the detailing of the tower.

LIBRARY INTERIOR: Aisled hall of three bays with square granite columns with pulvinated frieze and egg-and-dart moulding supporting round, keyed arches with moulded voussoirs and panels to the intrados. Above this runs a frieze with youthful figures reading. Brackets support the roof beams and there is a central skylight.

The BATHS EXTERIOR follows the same idiom as the library in colour, but with more lavish terracotta decoration to the symmetrical facade, and more conventionally Flemish-Jacobean detail. Three bay centre with oriel below aediculed gable. Ogee heads to lights of mullioned windows. The doorways emphasised by octagonal flanking towers, with oculi and terracotta cupolas. The central doorway has its swept-scrolled pediment surmounted by a large polychrome statuary presentation of the City Arms and on the door lintel is carved WOMEN'S BATHS. The doors at either side are similarly inscribed MEN'S BATHS/FIRST CLASS [right] and MEN'S BATHS/SECOND CLASS [left]. To the rear north side of the baths rises a tall cylindrical chimney stack with deep arcaded neck beneath the crown.

BATHS INTERIOR: The slipper baths are to the road front of the building with the swimming pools behind. Entrance to the Ladies' baths is through the central door and lobby. There are fourteen cubicles, the majority of which contain their original slipper bath, two lavatories and a cubicle for the attendant with fireplace. There is a pay desk with a segmentally bowed hardwood front and panels of stained glass. The first and second class baths lie to either side of the ladies' baths and are approached by corridors which both lead to a top-lit lobby with two segment-fronted cash desks to receive money for swimming or bathing. There are ten First class baths and thirteen [originally eighteen] second class baths. Both sets of men's baths have many of their original bathtubs and hardwood doors with original furniture to the cubicles. The ceilings have decorated basket-arched steel beams to the roofs above which are clerestories. Throughout the slipper baths there is an abundance of tesselated flooring with decorative borders, tiled walls and stained glass quarries to the windows with the original bell pulls and bell indicator boards surviving. The swimming pools are aligned N-S [1st class] and E-W [2nd class]. The first class pool has tiled changing cubicles lining the sides, above which are balconies with bowed iron fronts. The north end has an arcade at balcony level. There are decorated steel basket arches to the roof, below the clerestory and the pool retains its original glazed brick bottom and sides. The second class bath is plainer but has tiled walls, decorated arches, clerestory and glazed bricks to the pool bottom. The boiler and pump rooms have round-arched windows and tiled walls. The first floor is approached by an open well staircase with mahogany hand rail and wrought iron balustrade, the staircase hall having tiled walls, stained glass panels to the windows and a panelled wood ceiling. The boardroom has a decorative truss to the ceiling and bay window. Adjacent to this is the boilerman's flat. The laundry room has lost its sinks but retains its drying racks and above this the header tank remains in the roof.

A commanding group of public buildings in the street picture and epitomising the civic pride of the period with a lavish, complete interior.

This entry was subject to a Minor Amendment on 29 November 2016.