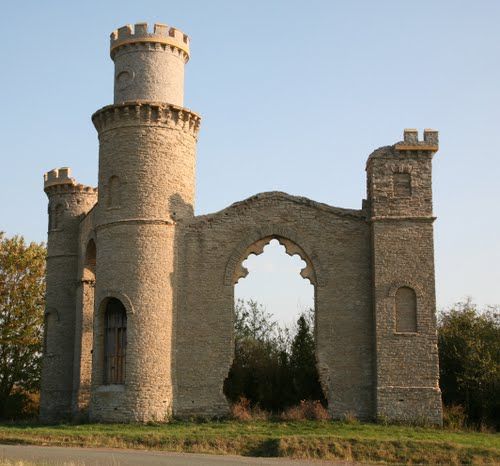 Folly ruin. c.1750-60, attributed to Sanderson Miller. Designed as an
eyecatcher ruined castle for the 6th Earl of Coventry, of Croome Court. Blue
lias random rubble. Central round tower with length of wall each side, canted
back and terminated in a smaller tower. Central tower with arched lower
opening, string course, blank arched panel above and ruined cap with machico-
lation. Plank door with studding to lower opening. Western side has wall with
shallow pitch gable springing from string course of tower and large ruined
Gothic window, the sill broken open to ground level, single rebate to jambs
and Bath stone cusping, like plate tracery to head. Wall terminated by a
narrow square tower with blank arched opening, string course, blank square
headed panel with keystone to top stage and another blank panel to East side
of top stage. No rear wall. Eastern side has double wall with large neo-
Norman round arch, dentilled string course at impost level and flat parapet,
terminated by round tower with single blank panel below and paired arched
panels to top stage, ruined machicolation. Within central tower a brick
staircase tower with stone winding steps.