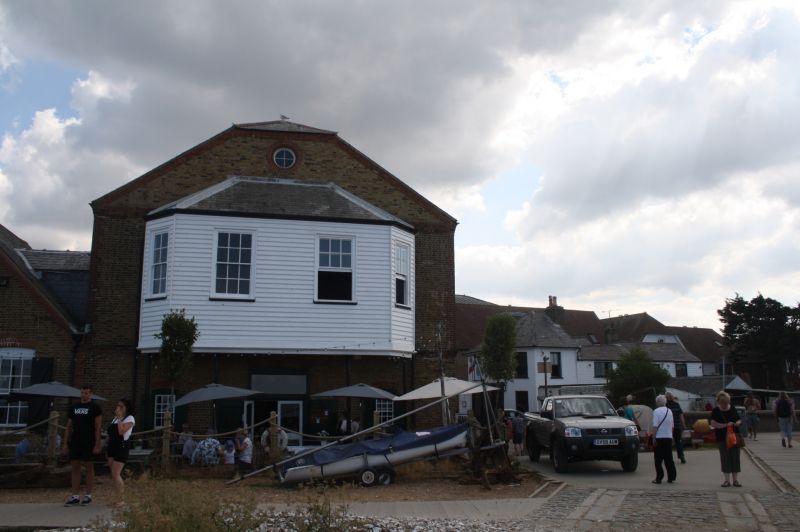 WHITSTABLE HORSEBRIDGE ROAD
TR 1066 NE
1/186 Royal Native Oyster
Stores
II
Oyster stores and club, now restaurant. Mainly of c.1890 but some ground floor
brickwork and 2 sashes on the seaward side, probably remain from an earlier
building of 1793. Stock brick with half-hipped slate roof, built in 2 parts,
the eastern part of lower elevation. This part is of 2 storeys, 2 windows, 2
cambered 12-pane sashes with horns, the lower part of the ground floor sashes
having no glazing bars. Central round-headed doorcase with semi-circular fan-
light and corbels. C19 panelled door. One of the windows has engraved the
words 'Committee Room'. Royal Coat of Arms of George III above doorcase and
words 'By Appointment to HM Queen Victoria' and above the panel with the words
'Royal Native Oyster Stores'. The east gable has the legend Royal Free Fishers
and Dredgers incorporated 1793 and a loading door. The taller western part has
some English bond brickwork to the ground floor of the side facing the sea, the
rest is Flemish bond. Red brick dressings. Three 12-pane cambered sashes with
horns to first floor. Ground floor side elevation has four 12-pane cambered
sashes with horns and 2 cambered double doors. Iron ties to left hand side of
building. The seaward side has a ogulus to the attic and the first floor has a
rendered first floor canted'project on with 4 sashes supported on 4 cast iron
columns. The ground floor has two C18 12-pane sashes with moulded architraves
and shutters and cambered double door with rectangular fanlight. Adjoining to
left is a 1-storey stock brick building with gable and red brick dressings.
Cambered opening to attic. Ground floor has cambered left side opening. Fixed
window in centre, originally part of a blocked doorcase and tall cambered door
to right. Side elevation has 2 cambered sashes. Interior has first floor hall
of 6 bays with queen post roof and platform with splayed bay. Turned wooden
balusters to staircase and pine panelling. Bar has exposed floor joists with
criss-cross framing. The building comprises a great hall for meetings of the
Royal Free fishers and Dredgers Company and underneath, rooms for sorting,
cleaning and packing oysters, offices and special storage tanks for oysters
awaiting transit.