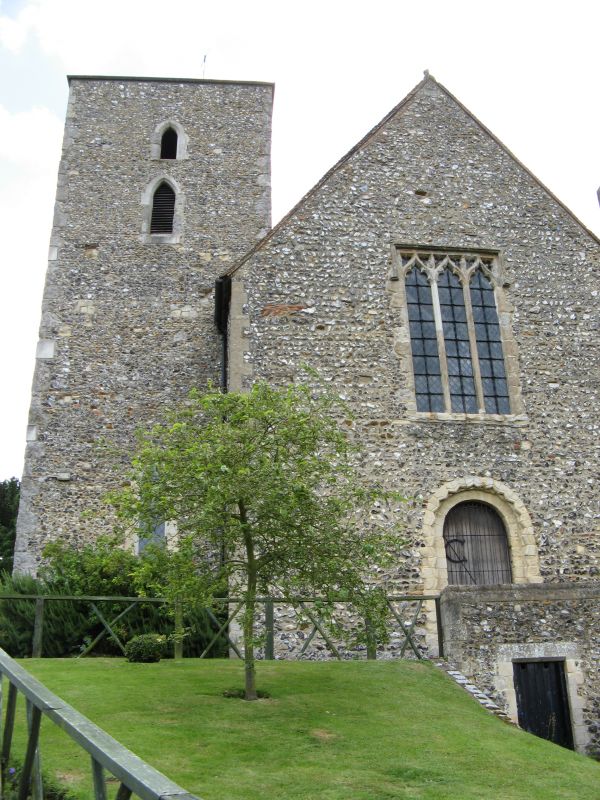 PLAN: the church comprises a chancel and nave (both of Norman date and belonging to Lanfranc's original foundation), with a tower and north aisle added in the C12 and a south aisle of the C14.

EXTERIOR: the church stands within the little sloping enclosure formed by the almshouses (rebuilt in 1840) to the west and south and St Nicholas's Farmhouse to the north. The west front features a Norman doorway with a zigzag moulding, and a square-headed three-light Perpendicular window above. The plain square tower, set back to the right, is of four stages with simple lancet openings. The nave roof sweeps down over the aisles in a continuous catslide. The projecting chancel has two-light windows with early Decorated tracery.

INTERIOR: the interior features Transitional Norman arcades, partly remodelled in the C14, with some Norman carved capitals surviving. The floor slopes downward from east to west, supposedly to facilitate the regular washings needed to prevent infection. The roof is of C14 crown-post type. The belfry, reached by a flight of medieval solid-tread stairs, contains four bells: one of c.1450 cast by William Chamberlain, and three of 1614-22 by Joseph Hatch. Other early features include C14 wall-paintings and stained glass in the chancel, simple timber benches in the nave and an octagonal font with carved beasts and blind Perpendicular tracery to the shaft. A treasury at the end of the north aisle displays artefacts from the medieval hospital.

The church was built as part of the original St Nicholas's Hospital – a leper hospital, probably the first in England, founded c.1084 by Lanfranc, archbishop of Canterbury 1070-89, and in operation until the end of the C14. Henry II visited St Nicholas's on his penitential journey to Canterbury in 1174. After c.1400 the hospital became an almshouse for the poor; it was recorded to have had sixty places for poor men and women in 1562. The foundation was reconstituted in 1565, and the domestic ranges were rebuilt in 1685 and again in 1840. It is still an almshouse today, for retired people.

At least 350 religious houses and hospitals for the care of lepers (known as leper or lazar houses) were established In England between the close of the C11 and 1350. Many have disappeared, destroyed during the dissolution of the monasteries in the 1530s or simply decayed. Some remain, however – including this one, the oldest; St Mary Magdalen at Stourbridge near Cambridge; St Mary Magdalen in Sprowston, Norwich; and the hospital of St Mary the Virgin, IIford. Others survive as ruins or archaeological sites.

Leprosy, known today as Hansen's disease, had entered England by the C4 and was endemic by 1050. Leper houses were usually built on the edge of towns and cities or, if they were in rural areas, near to crossroads or major travel routes – such as this one, on the Canterbury-London road. They needed to retain contact with society to beg alms, trade and offer services such as prayers for the souls of benefactors. There was high demand for places and 'leprous brothers and sisters' were often accepted fully into the monastic order of the house. Most houses had their own chapel and rituals for prayer and singing went on throughout the day.

Many lepers retained contact with their family and friends, being allowed to make visits home and to receive visitors. Attitudes began to change in the C14, particularly after the horrors of the Black Death (1347-1350), as fear of contagion led to greater restriction and isolation. However by this time leprosy was in retreat – possibly due to greater immunity in the population – and many houses fell into disuse or were put to new uses, often becoming almshouses for the sick and disabled poor.

St Nicholas's Church, a late-C11 building with C12 and C14 additions, is listed at Grade I for the following principal reasons:
* Architectural interest: a very well-preserved Norman and later medieval church with a good collection of early fittings and decoration;
* Historic interest: built for St Nicholas's Hospital, England's first leper hospital founded by Archbishop Lanfranc c.1084, this is a rare and early example of a medieval leper church;
* Group value: with the other listed structures belonging to St Nicholas's Hospital.