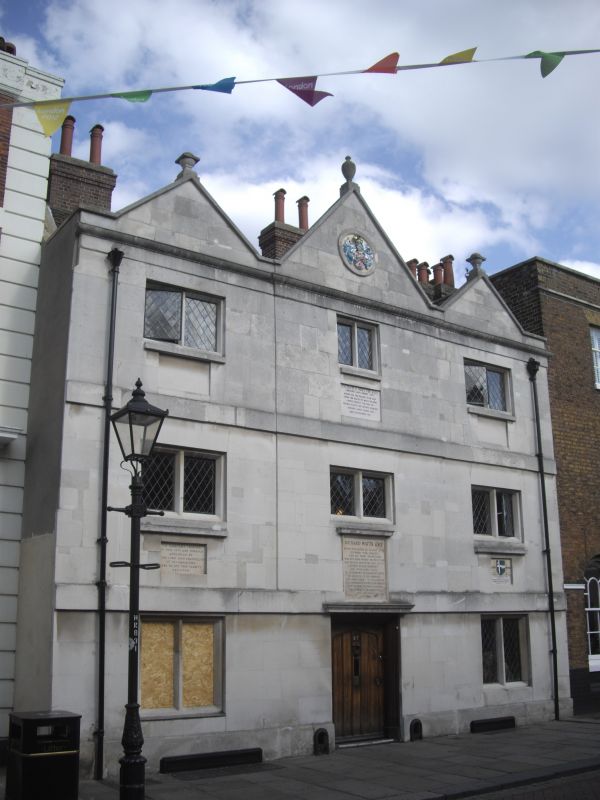 ROCHESTER HIGH STREET
TQ 7468 SW and TQ 7468 NW
7/131; 9/131 No 97 (Richard
Watt's Charity or
24.10.50 Poor Travellers
House)
GV I
Charity hostel for poor way-farers, now a museum with living
accommodation above. Founded in 1586 by Richard Watts 'for a
nights' lodging for six poor travellers not being rogues or
proctors (ie lawyers)' and superceded when the larger almshouses
were built by the Watts Charity in 1858 on Maidstone Road (qv
Reference 11/175). Half timbered, 1586, refonted in Portland
stone in 1771, but along the old lines; much renewed in 1604.
The front range with (originally) one large room to each floor,
subdivided to make a 2-room plan with central corridor, probably
in 1604 when a rear stair turret (that cuts across a former
window) and (at leat) one brick rear stack were also added. The
remarkable survival is the storeyed late C16 rear wing with 3
rooms to each floor to house the poor travellers which, with its
open gallery, seems to be modelled on contemporary coaching inns.
3 storeys. Front: symmetrical 3 bays, each under a coped gable
with renewed stone finial. The centre bay projects very slightly
above ground floor. Gables linked by parapet; moulded cornice;
prominent plat band between each floor. Roundel in central gable
wall containing heraldic achievement. 2-light windows with
mullion and moulded surround, plain sill, the casements with
diamond leaded panes. Below each window, a depressed panel in
the form of an apron, most of them containing texts. Central
doorway with moulded cornice, the wooden door surround with
double ovolo moulding, considerably renewed. rear elevation of
main range: stair turret (of 1604) gabled, with one 1st floor
sash window: 2 large external stacks with set-offs and tumbled
brickwork, one largely C19 but possibly replacing an older stack.
The rear wing (into which the 1604 stack intrudes): brick and
framing; roof slope (Kent tiles) continues as a catslide over
upper gallery of 5¼ (originally 6) half open bays, the part bay
blocked by stair turret with lath and plaster infill between
uprights, the whole supported by 4 large posts (chamfered with
run-outs) which divide the lower external corridor. All rooms
(except those closest to the main range, altered when stair
turret and stack inserted) have 2-light casements with stanchions
and lift-off hinges in ovolo moulded surrounds. The interior of
the 'poor travellers' rooms are very simple, with chamfered
ceiling beams, unembellished brick fireplaces, and some early
ironwork. The main range with framed ceiling of 6 panels, the
beams chamfered and stopped (to ground and 1st floor): 2 rear
fireplaces, one C17 with bake oven. Left-hand gable with blocked
4 light ovolo moulded window. Roof: diminishing principals, one
truss with braces, and trenched purlins. Cellar with rubble wall
that may be early.