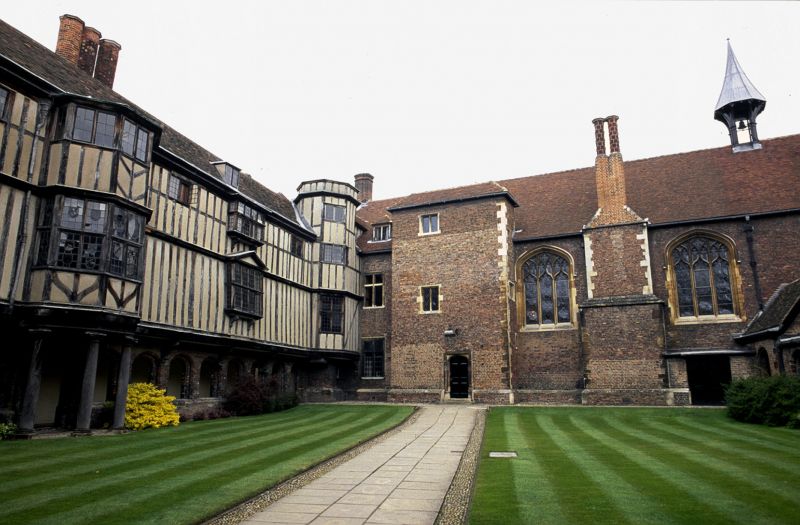 QUEENS' COLLEGE
1.
942
The Buildings surrounding
Front Court, Cloister Court,
Pump Court and Walnut Tree Court.
TL 4458 SE 6/279 26.4.50.
I
2.
Front Court Mason, Reginald Ely.
East Range with Gatehouse. 1448 Red brick with stone dressings. The Gatehouse
has 3 stages with octagonal corner turrets and a 4-centred moulded arch.
The Gatehall has a fine original ribbed stone vault. The Muniment Room
above has a quadripartite brick vault. The rest of the range has 2 storeys
and attics with reproduction eaves-cornices. Most of the windows have
been renewed. 3-storey turret with embattled parapet at the South-east
angle. The interior has original doorways modern staircases and some C18
panelling.
North Range 1448. In 2 sections, on the East the Chapel to the full height,
on the West the library with 2 storeys and attics. The Chapel was refitted
by James Essex in 1773-5, his ceiling removed in 1845, refitted again by
G F Bodley in 1858-61. It is now part of the Library. The windows are
restorations, the sundial probably mid C17, the lantern by H T Hare 1910.
The interior has a mid C19 ceiling; the Antichapel has panelling of 1775.
The fittings were removed to the new Chapel (qv) in 1890 except for an
amount of C19 glass. The rest of the range has a number of original and
C17 windows and C18 dormers. The annexe of 1804 contains the Library staircase.
The Library woodwork is 1612-3. Some C15 glass in the North windows.
The combination Room has C17 fittings, fireplace, doors etc; the bolection
moulded panelling of 1686. Early C19 heraldic glass. The President's
Study has a linenfold panelling of 1531-2, originally in the Hall and now
much made up; it has a deep frieze with carved coats-of-arms.
West Range. This contains the Hall, Kitchen and Butteries. 1449. The
Hall has 5 bays and was restored in 1854 with new features by Thomas Johnson;
there are also wooden cornices and bargeboards of the C18. The interior
was very altered in 1732-4 by James Burrough who ceiled it and added new
panelling. The roof was restored in 1845-6 by Dawkes. G F Bodley designed
the scheme of decoration in 1875. The original fireplace was restored
in 1861 with tiles by William Morris and Ford Madox Brown. The colouring
of the roof is supposedly on the original pattern. The windows have heraldic
glass by Hardman, 1854. The remainder of the range is of 2 storeys and
attics with mainly C18 replacement windows. There is some C18 fielded
panelling. The South-west corner turret was occupied by Erasmus in 1514.
South Range 1448-9. Some original windows, some C18 attic dormers. The
interior retains a number of original features, the beams and timber partition
walls and a stone fireplace with 4-centred lead. Some C17 panelling, and
much C18 fielded panelling and doors with fielded panels.
Cloister Court
North Range with the President's Gallery. The ground floor has a late
C15 arcaded walk of 17 openings with 4-centred brick arches. The oak posts
supporting the bays of the gallery above are of 1911. The paving is dated
1695. The timber-framed President's Gallery appears to be of the early
Elizabethan period, restored 1911. The South front has a central semi-
octagonal bay and a 3-sided bay at each end. Moulded bressumer, 2nd floor
string, and eaves cornice. The windows are of 2 and 4 transomed lights
with leaded lattices. The projecting brick bay at the West end of the
North side contains a staircase added in 1791-3. Tile North-east wing is
generally similar to the main range, and of the same date. The interior
of the Gallery is entirely panelled with late C16 or early C17 oak panelling
divided into bays by enriched Doric pilasters. The original fireplace
has a 4-centred head. The heraldic glass is part Cl6, part early C19.
The plaster ceiling is by H T Hare. The Essex Room in the North-east wing
also has late C16 panelling and a fireplace. There are 2 staircases, one
of the mid C17, one of the late C18. The upper floor has much reset panelling
from many different periods and an original stone fireplace.
West Range with the President's Lodge. Mid Cl5. 2 storeys and attics.
The ground floor has a 14 bay arcade (see the North Range). The 1st floor
has seven C15 2-light windows. The river front has a number of blocked
original features and others of the C17 and C18. The interior of south
end has a very fine late C17 staircase. The President's Dining Room has
early C17 oak panelling divided by reeded and fluted Ionic pilasters. The
original stone fireplace is flanked by Roman Doric fluted pilasters. The
oriel window has early C18 heraldic glass. The President's Drawing Room
has late Cl6 oak panelling with fluted Doric pilasters. The rest of the
lodge also has period features of interest.
South Walk. Same date and build as the North cloister, (see North Range)
but it stands free with a lead roof and the arcade has only 11 openings.
Pump Court This consists of the Essex Building, and L-shaped range, 1736-6O
by James Essex. White brick with dressings of Ketton and Portland stone.
The river front has a high stone plinth; and the whole a plat band and
1st floor level, cornice and balustraded parapet. The windows are sashes
with glazing bars in moulded stone architraves; the ground floor ones to
Silver Street have original wrought-iron grilles. The interior has an
original staircase, fielded panelling in the main rooms and 6-panel doors.
Walnut Tree Court
East Range 1617-19. Heightened in circa 1780, reroofed and embattled in
1823. Brick with stone dressings, 3 storeys. Both faces of the building
are symmetrical; the openings are original but restored. The interior
is much altered. There are several original stone fireplaces, and the
North main room has an original decorative wall painting employing a false
perspective.
The Chapel 1890. Designed by Bodley and Garner. Red brick with stone
dressings. Decorated detailing. 5 bays. Tall narrow interior with a
vaulted ceiling. The monuments from the old Chapel are of interest and
include 3 brasses of the C15 and C16. The glass is by Hardman 1860 and
1879, and by Kempe 1890, and 1892-1902. (RCHM).