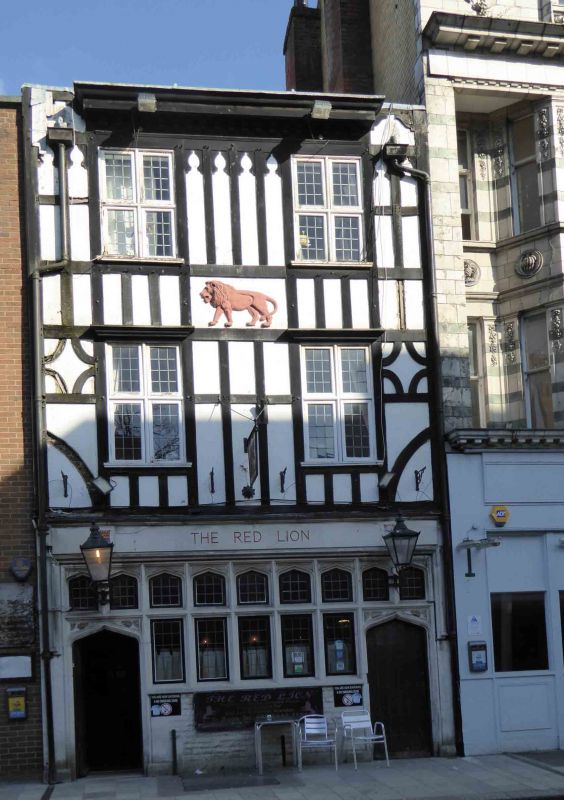 2.
Late C15 and early C16. Facade is 3 storeys C20 sham timber-framing but behind
is a well preserved late mediaeval timber-framed hall-house. The west part,
of 2 storeys and gabled attic, probably represents the original solar. Behind
is the very high hall of 3 bays long which rises the whole height of the building
to the tiebeam roof with windbraces which was probably altered in the C17.
A screened passageway with balustraded gallery above at first floor level
runs along the north side of 2 bays. The 3 posts supporting the gallery and
the greater part of the boarded partition are original. The balustrade of
flat-shaped balusters are probably C16. The east bay is filled with a wide
screened gallery at first floor level. Two stone fireplaces, probably early
C16 are built into the hall against the south wall of the east bay and in
the ground floor eastern chamber, with moulded 4-centred arch and rounded
tracery patterns in square panels in the front of the overmantel. Below the
hall is a mediaeval valut, probably remaining from an earlier house on the
site, reputed to be the 'Court room' where the intending assassins of Henry
V, Lord Scrops of Masham, Sir Thomas Grey and the flatly of Cambridge were
tried when Henry V was in Southampton in 1415, preparing for Horfleur and
Agincourt (See also St Julian's Church, Winkle Street).