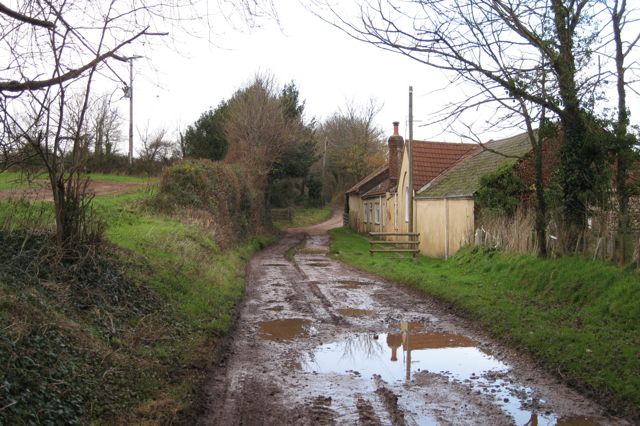 House. Circa late C15 origins, remodelled and possibly extended in the late C16,
early C17 refurbishment and partial re-roofing, late C20 alterations. Red sandstone
ashlar, the wing grey limestone ashlar to the first floor, rear elevation
colourwashed and rendered ; 2 axial stacks ; slate roof (thatched until the 1920s).
Plan: H plan with a single depth main range, 2 rooms wide with a through passage and
left and right crosswings, the right end (west) crosswing a converted C18 or early
C19 barn. Complex evolution, the main range originating as a late medieval open hall
of at least 3 bays from the left end stack - the medieval roof has been extended or
rebuilt at the right end. The 2 room plan left crosswing is either slightly later or
contemporary with the hall : 2 storeys and providing a parlour with a solar over at
the front and lower status rooms to the rear. An external stair turret on the rear
wall of the hall gives access to the first floor of the wing. The hall ceiling, of a
late C16 character, was followed by an early C17 programme of alterations: the cross
passage screens are probably of this date. The position of the C17 kitchen is
unclear. Late C20 work has involved the introduction of features from elsewhere,
extensions, and created new partitions in the east wing, as well as converting the
barn into a mock 'great hall' with a gallery and chimneypiece.
Exterior: 2 storeys. Asymmetrical 3 window front with a 2 storey porch to right of
centre with a coped semi-circular gable, and rounded outer stone doorframe and a good
C16 moulded inner doorframe with urn stops and a C16 panelled front door. The ground
floor windows, 2 to the left of the porch and 1 to the right have square-headed
hoodmoulds and C20 timber casements with leaded panes. 3 gabled dormers with C20
timber casements ; 3-light window to first floor of porch. At the right end the
former barn wing projects to the front with a C19 2-light traceried window said to
have originated from the dower house of Castle Howard. The inner return of the east
wing has 1 ground floor window (formerly a door) and 1 first floor window - it has
been extended by a late C20 single-storey addition. A brick bread oven projects from
the left end stack in the angle between the main range and the east wing. The rear
elevation has a C20 rear door to the passage with a pediment, C20 ground floor
windows with Gothick glazing bars, and 5 gabled attic dormers with C20 casements.
The stair turret is rectangular on plan and now has a flat lead roof. The outer
return of the east wing has 5 ground floor high transomed casements with leaded
panes, those to the rear may be late C17, the others are probably copies. First
floor C20 casements with Gothick glazing bars.
Interior: High quality C16 and C17 features survive. The early C17 high quality
passage screens are panelled and moulded, part of the panelling of the higher end
screen has been moved and re-sited on the stair which has an unusual handrail and
turned balusters and may be a C20 invention using old materials. The hall, to the
left, has the remains of a late C16 decorated plaster ceiling, a wall frieze and a
splendid plaster strapwork overmantel, dated 1620, with the arms of the Lutton
family. Red sandstone open fireplace with hollow chamfered lintel and jambs.
Chamfered 2-centred sandstone doorframes lead into the stair on the rear wall and the
parlour at the left end. The parlour has a fireplace back to back with the hall
fireplace, with an iron lintel and bread oven ; moulded crossbeams and an incomplete
plaster cornice which extends to flank the crossbeams. The rear room in the wing has
a rough crossbeam and good C18 doors said to be introduced from the dower house at
Castle Howard. The right-hand room has a rebuilt fireplace with a moulded lintel and
no exposed joinery. The first floor of the east wing has been re-partitioned but an
original closed partition survives, dividing a fine 4-bay C16 arch braced wind braced
jointed cruck roof to the front from a plainer 2-bay jointed cruck roof to the rear ;
the numbering on the trusses indicates that the roof is of one date. The roof of the
main range is somewhat obscured by later supporting timbers but at the left end 3
smoke-blackened trusses survive (probably jointed crucks) with collars mortised into
the principals. The former ridge was held on a V-shaped notch in a strengthening
piece and the former purlins were threaded. Mortises visible on one of the trusses
show that the original form was arch braced and wind braced. One of the trusses has
a scarf joint in the principal rafter above collar level. The other trusses are C17
with lap dovetailed collars although one has a re-used smoke-blackened timber for the
collar.
Mowlish was a Domesday Manor and passed into the possession of the Lutton family in
the reign of Henry IV. In the early C18 it belonged to Mr Long, Sheriff of Devon,
who also owned Brickhouse (q.v.) and Newhouse (Swete). It was rented to a tenant
farmer in 1796 when Swete visited it and sketched it : he described all but the main
range and east wing as " of the lowest order - mere modern erections for the
accommodation of a Farmer" Swete's watercolour shows the main range much as at
present with what appears to be a detached farmbuilding at the right end.