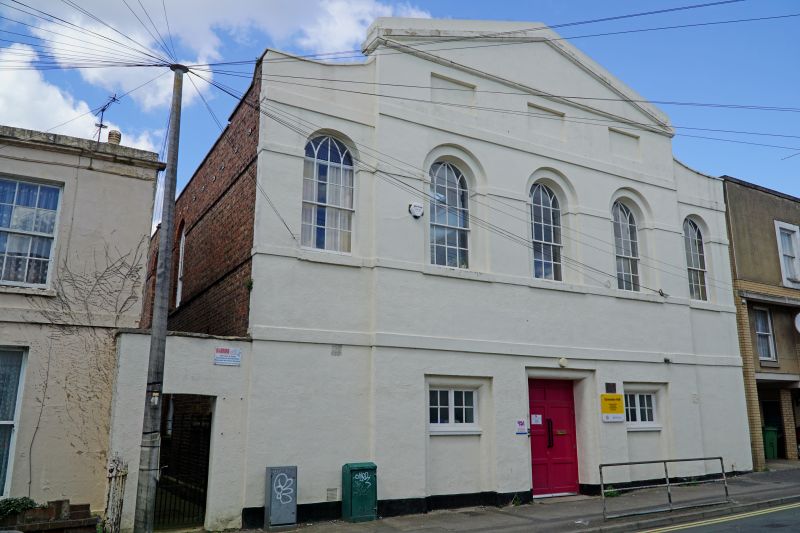 Baptist chapel, now youth club. 1817-19 for the Revd Thomas
Snow, with later alterations. Brick with roughcast front.
EXTERIOR: 2 storeys, 5-window range. Central pedimented
breakforward, and swept parapets above recessed wings. Central
entrance has double part-glazed doors with overlight, between
2 recesses with casement windows. Band over, then continuous
sill band. Windows: round-arched 8/8 sashes with Gothic
glazing to heads. Continuous band above and 3 blind panels to
centre.
INTERIOR: noted as having segmental barrel-vault ceiling with
shallow dome lantern. Cast-iron gallery to 3 sides.
HISTORICAL NOTE: Built for Revd Snow after his removal from
Portland Chapel, North Place (qv) and used for Strict Baptist
Services until 1822 when Snow reverted to the Church of
England and so handed it over to Anglican trustees. In 1827 it
was sold to Congregationalists who re-opened it as 'Highbury
Chapel'.
(Sampson A and Blake S: A Cheltenham Companion: Cheltenham:
1993-: 53; RCHME: Nonconformist Chapels and Meeting-Houses:
Gloucestershire: London: 1986-: 76; Blake S: Cheltenham's
Churches and Chapels AD 773-1883: Cheltenham: 1979-: 9-10).