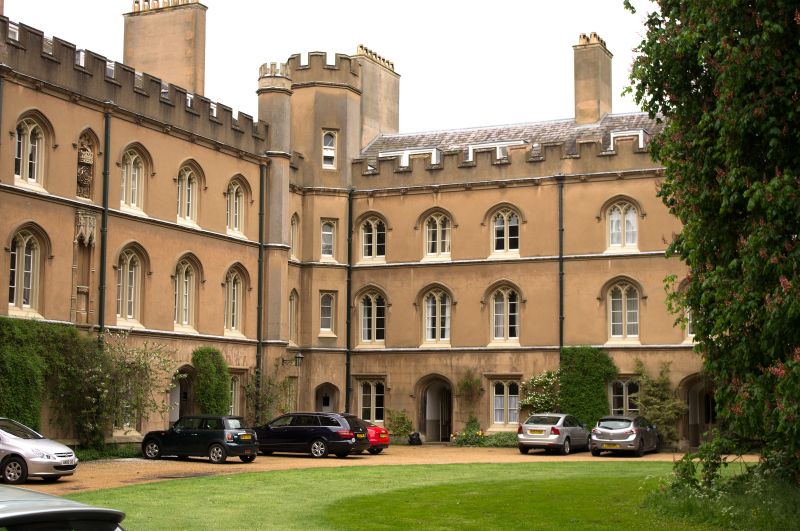 26.4.50.
I
Great Court east range with Great Gate. The lower stage of the Great Gate and the flanking ranges are surviving buildings of King's Hall, begun circa 1490. Building went on slowly until circa 1505 and then lapsed until 1528-29. The gate tower was completed in 1535. The Gate is of three storeys, the east wall of ashlar, the remainder of brick with stone dressings. The east front is decorated above the arch with coats-of-arms, inscriptions and a statue in a niche, Henry VIII, begun by Paris Andrew circa 1600 and completed by William Cure 1615.

The main gate is by Buxton 1523, the smaller gate is mid C18. The west front has three statues in niches, James I, Anne of Demark, and Prince Charles, all by William Cure 1615. The Gate hall has a timber vault of 1845 on the original springers. The remainder of the range is of two storeys and attics, roofed with stone slates and tiles. The western face was embattled circa 1600. The northern part of the range was entirely refaced by Salvin in 1856 on the east;and in 1935 on the west.

North Range: the Chapel was completed in 1567, refaced in ashlar in C19, and has a modern slate roof. The mason was Perse, the joiner Stephen Wallis. 1706-17 the Chapel was repaired and refitted. Restored in 1832 by Edward Blore. 1868-73, the Vestry, Choir-room and porch were added by A W Blomfield, and the Chapel was re-roofed, painted and glazed. Twelve bays, with a 24 bay roof. Brass of 1565; oak communion rails of the early C18. There are a number of important sculptured monuments in the Ante-chapel, including ones to Newton, Bacon, Macaulay etc with work by Nollekens, Flaxman and R Westmacott. Organ by Bernard Smith and Christopher Schrider, 1708. Very good panelling, screen and stalls of circa 1735. Corinthian reredos, early C18.

King Edward's Tower was the Gatehouse to King's Hall. 1428-32, John Dodington master-mason, erected on its present site, with alterations, 1599-1600. Clock and bells installed 1610, renewed 1726-27. The bell turret is mid C19. The south face is decorated with carvings, shields and inscriptions, and includes a statue of circa 1600 of Edward III. The interior, including the Gatehall has been modernised.

The Old Library range to the west of King Edward's Tower. Three storeys, the Library being removed from the top floor in 1694-95. Built 1600-1601, burnt and rebuilt in 1665-66. Eight bays clunch, rubble and brick with five C17 buttresses. The windows, of two and three lights, are mostly renewals. The interior of the range contains some reused original panelling and also some C18 panelling and fittings.

West Range: the Hall was begun in 1604, designed by Ralph Symonds and built by John Symes. Francis Carter was master carpenter. The interior was restored in 1866 and 1955. Seven bays. Porch with attached Roman Doric columns on the east front Hexagonal timber lantern of three storeys, with a wrought-iron weather vane. The interior has the original double-framed timber hammerbeam roof of seven bays. Dais panelling punctuated by Ionic pilaster. Two stage screen of five bays with Ionic and Cornithian columns, 1605-1608; the doorways and fanlights are late C19. The windows have a great deal of heraldic glass, partly of the late C16 and early C17 and partly after 1850; there are also some medieval fragments.

The Old Kitchen, now a second Dining room (1969) is of 605 and open to to the roof. Three-bay hammerbeam roof. Three large fireplaces. The Buttery and the rest of the range was re-modelled by James Essex 1771-74. Three storeys and cellars with a slate roof. The interior has a late C18 staircase. The Old Combination Room has a plaster dado and other contemporary decoration. North of the Hall the range contains the Fellows' Parlour and Combination Room and the Master's Lodge. Begun in 1554, rear wing 1892 by Sir Arthur Blomfield. The Lodge is 1601-13, improved 1700-10. Roof renewed 1785-86. Altered by Salvin 1841-66, the front onto the Court is mostly Salvin 1841-43. The Master's porch is circa 1600. The west front has restored windows of all periods. The Master's Entrance hall has C16 panelling, the staircase is 1705. The Dining Room and Judge's suite have early C18 bolection moulded panelling. The Drawing Room has the original late C15 plaster ceiling and a fine fireplace. There are many other original and later features of interest.

South range: two storeys and attics with the roughly central Queen's Gate of three stages. The North front ashlared; slate and tile roofs. 1594-1602, the gate is dated 1597. The North front was repaired 1753-54. The whole has been repaired and restored at various other times. The Gateway has a statue of Queen Elizabeth among its external decoration. The oak door is original. The second floor room has plain C18 panelling. East of the Gate the range is of 14 bays with C18 lead rainwater pipes. The interior contains three original staircase 'L', 'M' and 'N', original and C18 panelling and other features. West of the Gate are ten bays, the last being an C18 rebuild. There are doorways, panelling and other features.

King's Hostel: part of the original buildings of King's Hall, the west range of the former inner court. The oldest building in Trinity College, part built 1375-77, partly 1416-22. Restored by W D Caröe in 1905. Access is through King Edward's Tower. Externally there are a number of original doorways and windows, but the west side has been completely restored. Internally there are a number of early features, fireplaces, open timber ceilings etc. and several rooms have C18 bolection moulded or fielded panelling.
Nevile's Court: the north and south ranges were built between 1605 and 1612, originally three-fifths of their present length. The Court was originally closed by a screen with central gateway, probably Nevile's Gate (qv), but this was removed with the building of the Library 1676-95, when the north and south ranges were extended to their present length. The north and south ranges were remodelled and in part rebuilt by James Essex between 1755 and 1758.

North range: three storeys and faced with Ketton stone ashlar and modern synthetic stone. The whole of the ground floor is a cloister walk of round headed arches and Roman Doric columns of a Brunelleschian type. Over each of the arches is a three-light transomed windows on each floor. Parapet, slated and tiled roof. The top floor was transformed from the previous attic by James Essex. There are three staircase towers on the north side. The interior has a number of original features including doorways and staircases. Staircase 'G' is 1676-81, Staircase 'L' is mid C18. There are also some original doors and some late C17 bolection moulded panelling.

South range: little of the original remains except the form and basic design. The eastern extension was built by Robert Grumbold 1681-82. Nevile's front was entirely rebuilt by James Essex in 1756-57, and the interior refitted throughout in 1758. The north front is as the south front of north range. The south front was restructured to become the north range of New Court, being turretted, battlemented, faced in Roman cement and given a six arch arcade with four-centred arches. Internally the fittings are nearly all of 1758, although some earlier panelling was re-used. The 'Old Guest Room' has bolection moulded panelling of 1682 by Cornelius Austin.

The Library: the west range of Nevile's Court. 1676-95 by Sir Christopher Wren, mason Robert Grumbold. The ground floor has an open undercroft of eleven bays supported on Roman Doric columns, the upper 'Library' floor having an Ionic Order above a balustraded parapet with plain pedestals, the centre four supporting statues. Each arch on the upper floor contains a three-light window with square stone mullions and a moulded transom. The statues are of Mathematics, Physics, Law and Divinity and are by Cibber. The west front is similar except that the lower stage is enclosed, an ashlar front with three doorways and ten windows, with a Roman Doric order. The openings have the original wrought-iron gates of 1691-92, The upper floor has 13 windows. The north end is covered by the staircase pavilion, the south end by the west range of New Court. Internally the ground floor is supported on a row of 14 Roman Doric columns. The staircase pavilion has a wrought-iron balustrade to the staircase, bolection moulded panelling, and a fine coved plaster ceiling. The Library has panelled walls with projecting bookcases crowned with wooden busts carved by Grinling Gibbons. There are also marble busts at the end of each bookcase which are not part of the original scheme. There is also a full length marble figure of Charles Seymour by Grinling Gibbons, 1691. The woodwork and carving in the panelling, bookcases, doorways and coats-of-arms is all of extremely high quality. The marble busts include ones by Roubiliac, Woolner, Scheemakers, Rysbrack, etc. There is a seated marble figure of Lord Byron by Thovaldeen, 183l. The reading tables and stools are all original. The ceiling is of 1850, though to Wren's original design.

The Tribunal on the west side of the Hall, and centred on Nevile's Court. A Roman Doric screen in Ketton stone ashlar by Robert Grumbold, 1682-83. The terrace has semi-circular steps and a stone balustrade. Four of the pedestals have C18 wrought-iron lampstandards.

New Court 1823-25, by William Wilkins. In the Tudor Gothic style. Three storeys and attics. The river front is in Ketton stone ashlar, all the internal faces and the east front are cement-rendered. Moulded plinths and strings at each level. Embattled parapet. Two light windows. The east and west gate towers have four centred arches with pointed-segmental plaster vaults. The east, west and south ranges have features generally as described above, there are minor differences and some alterations. The north range is described under Nevile's Court. Internally there are many plain original features and some reused from earlier buildings. (RCHM).