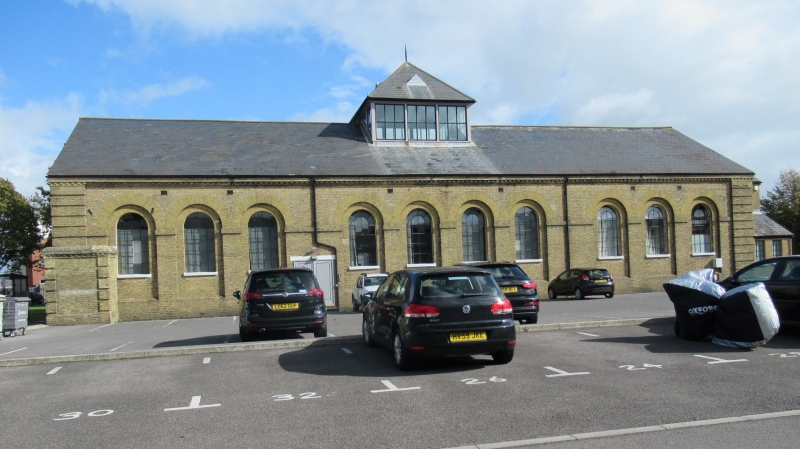 Gymnasium. Dated 1868. Yellow stock brick and slate roof Rectangular single-depth plan with S changing rooms. EXTERIOR: single storey; 10-window range. Rusticated brick clasping pilasters and an eaves cornice, with round-arched metal-framed windows in matching recesses, 3:4:3 to the sides, the N gable has 3 blind stepped arches with single-storey porch at N end with rusticated quoins, and the S entrance front has central door with round-arched windows above and to each side with paired narrow lights. INTERIOR: has a timber trussed roof, and changing rooms and viewing gallery at the S end. HISTORY: gyms were ordered to be built at barracks in 1862, to raise the physical standard of the troops, and were designed by Royal Engineer officers. This is one of the earliest surviving examples, with several architectural similarities with the large Brompton Barracks gym at Gillingham; it formerly had a large octagonal lantern and 2 tall stacks at each side. The barracks were built following the Crimean War .This is the only example of this type of barracks in the country, forming a complete group with the Lines earthworks, and marking Gosport's importance in the defences around the Portsmouth dockyard. (Harfield A: The Gosport Barracks, sometimes known as "New Barracks": Gosport: 1988-: 16-21; Journal of the United Services Institute: Maclaren A: Military Gymnasium 1865-: 217; Plan and Elevation: 1868-: PRO, WORK 41/212).