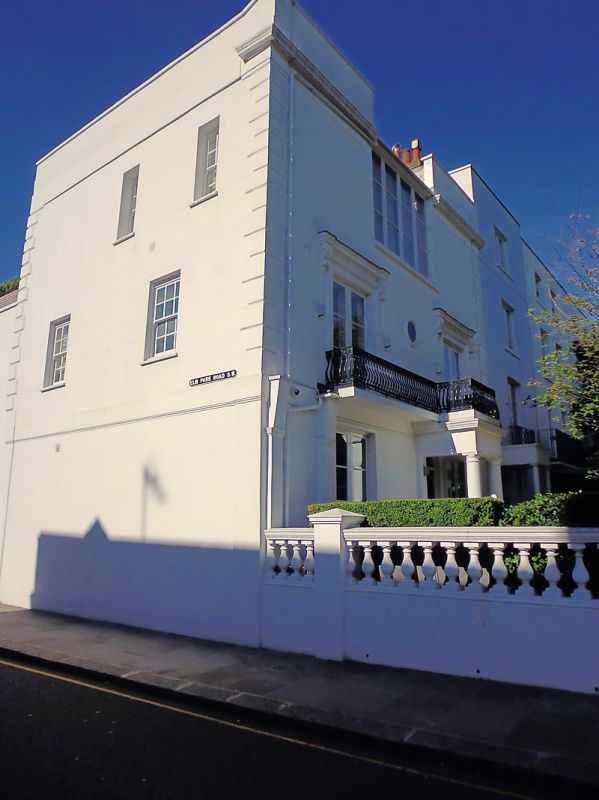 House with artist's studio, originally two houses. Circa 1804, originally two houses, amalgamated and altered in 1909 by William and Evelyn De Morgan. Stuccoed with roof concealed by parapet but central stock brick chimneystack visible. Three storeys; two windows except for artist's studio window on second floor. Moulded eaves cornice interrupted by central tall four-light studio window. First floor has French windows in moulded architraves with cornices and brackets and tall casements on ground floor, both of mid C19 type. Central portico with Tuscan columns and above a cast iron balcony extending in front of the first floor windows. Blue Plaque between first floor windows. Rear elevation has casement windows. Attached to front and rear is a stuccoed wall, the front wall having balusters and gatepiers with pyramidal caps. Interior not inspected and may have interesting features. William De Morgan, famous for his formative influence on the Arts and Crafts movement and to some extent on Art Nouveau, perhaps the greatest of all English ceramic artists, was also wen known as a novelist when he lived here and he died here in 1917. The original houses of c1804 were part of Bolton Place prior to 1867 and may formerly have been part of Church Lane West.