A Grade I Listed Building in Bardfield Saling, Essex 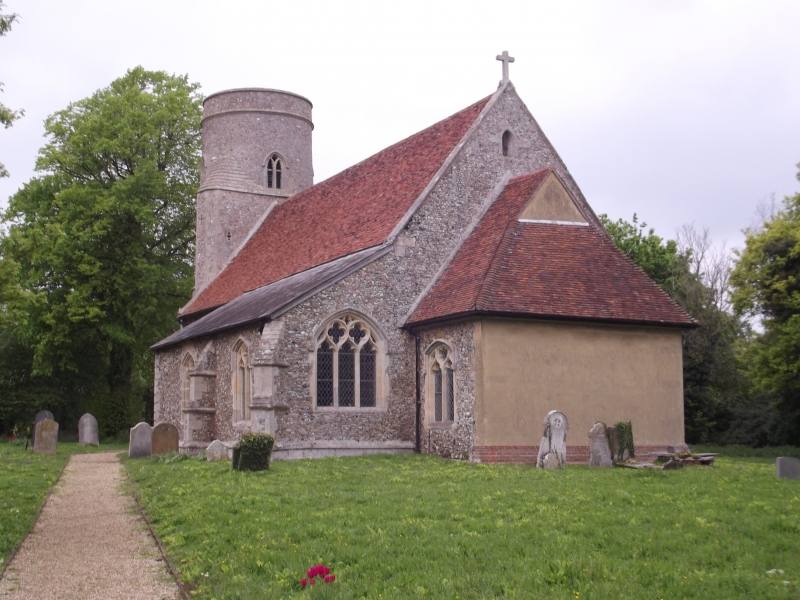 Parish Church. C14. Said to have been unfinished at the time of the Black
Death 1348-9. Consecrated and Chancel added 1380. C17-C20 alterations and
additions. Flint walls with some rendering. Stone and clunch dressings. Red
plain tiled Nave and Chancel roofs that to Chancel hipped with gablet, grey
slate south aisle lean-to roof. Stone parapet verge with cross to Nave.
Exterior. East wall of Chancel rebuilt and plastered with no east window, after
rocket damage during 1939-45 War, North and south walls each with a window of 2
trefoiled ogee lights with tracery under segmental pointed head with labels and
head stops. Nave. North wall with 4 buttresses, two 2 light windows with
tracery over in 2 centred heads, the eastern window with a fragment of medieval
glass. North doorway now blocked with chamfered 2-centred arch with label and
stops. West of this door is a stoup with pointed stone head, red brick supports
and stone bowl. The circular plan west tower, ll½ feet in diameter, is of 3
stages with plain parapet. North, south and west ground floor windows each of
one trefoiled light. Second stage with similar windows to south and west. Bell
chamber with north, south, east and west windows each of 2 cinquefoil lights in
2-centred heads with labels. The south east stair turret with cruciform loops.
Gargoyles to parapet. Nave. South wall with buttress to west angle and 2 light
window adjoining. East wall window of 3 cusped lights with tracery over. Label
with foliate stops. Above the Chancel arch is a chamfered window opening of one
Light with a 2 centred head. South Aisle. Two buttresses and 2 restored 2-
light windows under segmental pointed heads with labels and stops. South porch
C19/C20 2-centred arch. The south doorway similar to north door. Above the
porch is a stone arch, probably the grooving of a previous porch. Internal
features. Ceiled and plastered 7 cant roofs to Nave and Chancel. The Chancel
with probably C14 wall plates. The Nave with 4 plain tie beams and moulded wall
plates. The Chancel arch is 2-centred of 2 orders, on the east side the
moulded jambs have one semi-octagonal and 2 semi-circular shafts with moulded
capitals and a chamfered plinth. South of the Chancel arch is an ogee-headed
squint cut down to floor level. There is a mid-C15 indent of a man and a woman
with an inscription plate on the Chancel floor. The Nave has a C18 gallery at
the western end, with panelled front and 2 chamfered support columns. The
gallery houses a C18 chamber organ, once the property of Sir George Elvey, for
many years organist of the Chapel Royal, Windsor and dedicated in this church
1933. The floor below the gallery is tiled with medieval floor tiles. Circa
1625 wooden hexagonal Pulpit is carved with angle pilasters and arches in
perspective to panels. Carved panelling in front of pulpit. Late C18 panelled
pews. Late C15 octagonal Font with ogee headed panels and panelled stem. C17
oak chest. The South Arcade and Aisle of 3 bays has 2 centred arches of 2
moulded orders, moulded labels with head stops. Quatrefoil columns with keeled
rolls between the foils, moulded capitals and bases. Graffiti, including 2
human figures and inscriptions John Guest 1608, P. Goodey 1782, Thos. Cross 1796
to bases of arcade columns. C14 screen at eastern end of arcade, of 2 bays,
each of 4 trefoiled ogee lights with quatrefoil tracery, moulded mullions, posts
and top plate. The screen was at one time used as a reredos to the main altar
and the 3 frames of fine CL9 straw work at the west end of the aisle were made
to fit into it. C14 Piscina in south wall with moulded trefoiled ogee head
and label, no bowl. To the west of the Piscina is a crudely worked bowl with
foliate decoration reputed to be part of a pillar piscina. Sedile below south
east window has its cill carried down to form a seat, with splays Cut back and
ornamented with cinquefoiled squinches. Part of an early wall painting and
inscriptions to west of south doorway. West Tower, east doorway has chamfered
jambs and a 2 centred arch of 2 moulded orders with a moulded label and head
stops, above which is a window of one trefoiled light. The round tower is one
of 6 remaining in Essex and is the only example in the United Kingdon of the
decorated period and, therefore, apparently the last of its kind to be built in
Medieval times. RCHM 1.