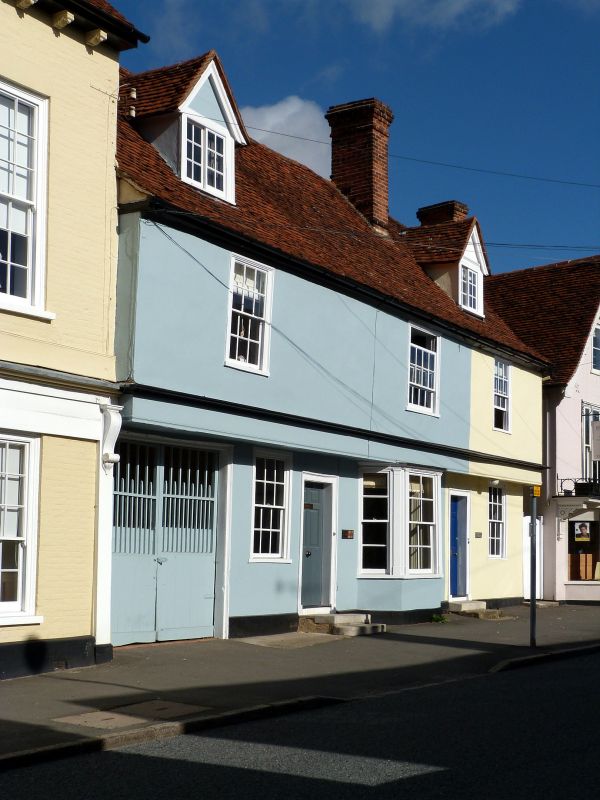 House, now 2 houses. Late C16, altered in C18 and C19. Timber framed,
plastered, roofed with handmade red plain tiles. Main range of 4 bays facing
SE, with axial stack and external stack to right. Parallel range to rear of
centre, and long single-storey range beyond. Small weatherboarded extensions
with felt roofs in rear left angle, one 2-storey and one single-storey. Complex
series of 2-storey extensions to rear of right end (no. 43), the last with a
slate roof. 2 storeys. Ground floor, 2 C18/early C19 sashes of 12 lights, and
splayed bay of early C19 sashes of 4-8-4 lights, below full-length jetty. First
floor, 2 C18/early C19 sashes of 12 lights and one of 16 lights. All the front
windows have crown glass. 2 C19 horizontal sashes of 6+6 lights in gabled
dormers. 2 early C19 6-panel doors, bottom panels flush, others fielded, each
with 2 stone steps. No. 43 has a C19 cast iron bootscraper. At left end, pair
of vehicle gates with paled tops to access to rear. Moulded fascia to jetty,
moulded eaves cornice. No. 41 has at the rear, on the first floor, one C18/
early C19 horizontal sash of 10+15 lights, one late C19 sash with marginal
lights, and one C18/early C19 splayed bay of sashes of 8-12-8 lights, all with
handmade glass; the long single-storey extension has 2 early C19 sashes of 16
lights in the left return. A rear extension of no. 43 has on the first floor
one C19 horizontal sash of 4+4 lights. Both interiors have been comprehensively
re-styled in the C18 and C19, with most beams boxed and most of the timber frame
concealed. No. 41 has jowled posts exposed, and one chamfered transverse beam,
unstopped, and early floorboards. The parallel rear range has a chamfered axial
beam, unstopped, plain joists of horizontal section (some replaced). Between it
and the main range is a pair of C19 half-glazed mahogany doors with marginal
lights of coloured glass. One white marble fireplace and one of grey marble.
No. 43 has on the ground floor an early C19 fireplace with fluted surround, and
on the first floor an unusual late C19 cast iron grate in Gothic Revival style.
Clasped purlin roof. RCHM 14.