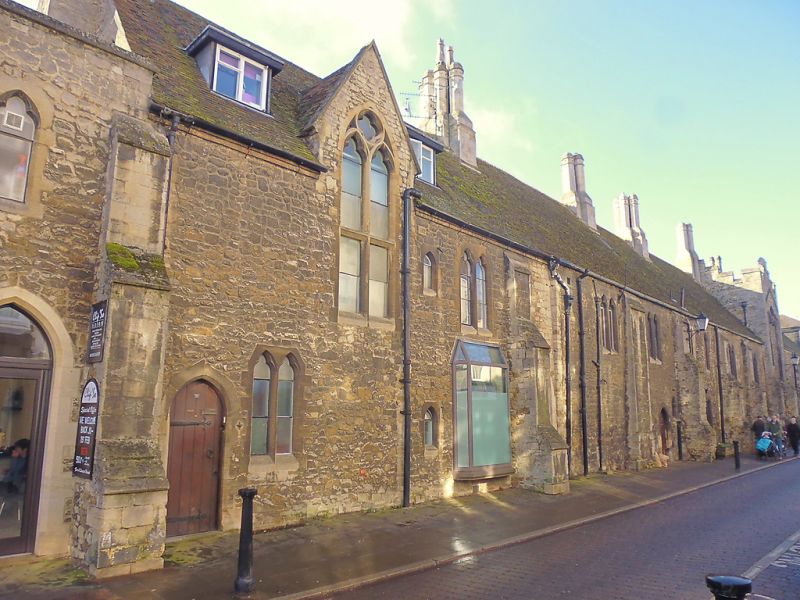 THE COLLEGE
1.
1082
The Sacristy Gate and
Goldsmithts Tower
(Formerly listed. as
Gate and Subsidiary buildings)
TL 5480 1/90 23.9.50.
I
GV
2.
The Sacristy is Part of a long range of buildings which back onto the High
Street on the north side, including the Almonry and the wall to the Almonry.
The Sacristy, Gate and Goldsmiths tower were erected by Alan of Walsingham
soon after he became sacrist in 1322. They probably incorporated an older
building, known as The Old Hall in the c14. the only part of Walsingham's
building which survives is the north wall and buttresses built of Carr stone
rubble with Barnack stone dressings. The remainder is mainly Cl9. 2 storeys
and attics The 1st storey windows are paired with cusped arches end leaded
lights and the ground storey has 3 light arched windows. The north front
is divided by heavy buttresses with 2 offsets and the south front (C19)
has a parapet with string course end is divided by buttresses. Roof tiled,
with C19 stone shafted chimney stacks and gabled dormers The sacrists
gateway was restored in the C19. It has flanking buttresses and rises to
a crow-stepped gable on the north front and a castellated parapet on the
south front. Above the archway on both fronts there is a 2-light arched
window with tracery, The Goldsmith's Tower, which stands at the west end
of the range, contained the Goldsmith's workshop (Alan of Walsingham was
himself a goldsmith) and the sacrists chequer. It is a square tower, the
upper part of which was rebuilt in the C19, with a high plain parapet and
stringcourse, corner buttresses with 2 offsets and a 2-light pointed arched
window with tracery. The ground storey has a segmental arched entrance way.

The Almonry, Wall to the gardens of the Almonry and Painted Chamber, the
Sacristy Gate and Goldsmith's Tower form a group with all the listed buildings
in High Street except No 2.
See also general group description under the Cathedral of the Holy Trinity.