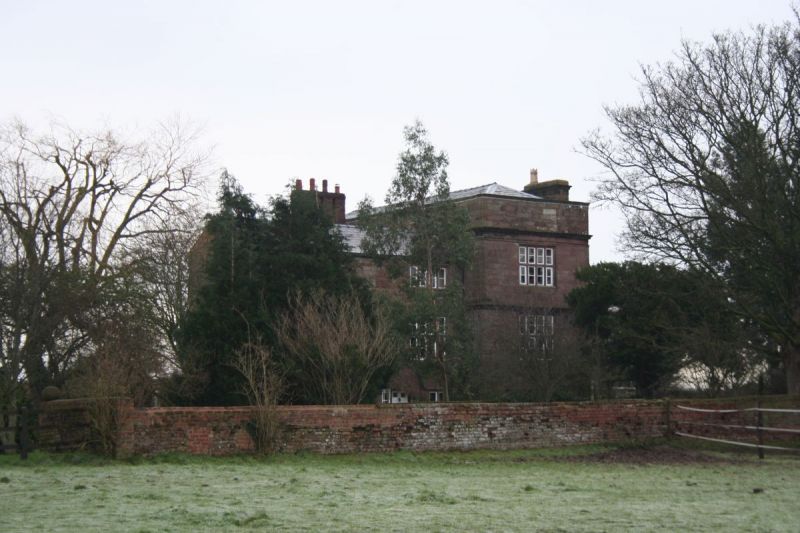 Formerly mansion, now farmhouse: dated 1637 for Henry Hardware IV but
substantially reduced in size by 1812. Tooled ashlar Manley sandstone,
hipped Welsh slate roof and 2 massive stone chimneys on the main
facade. 1 brick chimney with C17 style stacks on lesser range.
Artisan Mannerist. Original probably a large rectangular house with
short crosswings facing east, now L-shaped. 3-storey over basement,
symmetrical 5-bay south garden front. Moulded bands at 1st and 2nd
floor and on the blocking course. Large blank chimneys to either side
of the 3-bay centre. The central bay also projects slightly and has a
door approached by 4 steps. Late C19 restored Tuscan architrave to a
moulded stone doorcase with a fanlight with stone mullions. All the
mullions are half round to the front, cyma-moulded to the rear.
3-light mullioned and transomed windows in moulded surround and a
4-light mullioned window in the blocking course above the doorcase.
Remaining bays have mullioned and transomed windows on the ground and
1st floor only. Right end bay has modillions at the cornice and the
right side has a 2-storey canted bay window. North and east fronts
show the remains of a sumptuous great hall at 1st floor level.
Semi-circular headed doorcase with strapwork in the spandrels and an
ornate date plaque reading ANO 1637 DMI below a blocked Venetian window
motif with a segmental pediment. To the left is a column capital and
voussoir of a doorcase, similar to one hidden internally. The latter
has an elliptical medallion flanked by Renaissance pilasters showing
above on the east front. This front also shows the large moulded
fireplace of the hall and 2 blocked doorcases, one above the other, at
the right end. 3-storey, 4-bay west front (slightly reduced in height)
has a mixture of 4-light mullioned and transomed windows. Added late
C19 porch hides a blocked 4-centred arched doorway.
Interior: Entry from south front into a room with restored and
probably moved open well oak staircase with 2 levels of pierced splat
balusters, a moulded handrail, square newels with finials and the base
of the balusters on the open string. To the front is a blocked
semi-circular headed doorcase, formerly into the great hall. To the
right is a moulded stone doorcase and the room contains a chamfered
4-centred arched fireplace. Basement below has a blocked depressed
arch to the fireplace. Minor range contains a fine semi-circular
arched doorcase on plain columns, with a slot to contain a wooden
screen. This is carried below on a massive corbel. The remaining
features are vernacular, some exposed beams and doors with 2 moulded
panels.

An intriguing portion of what must have been a fine Jacobean mansion,
where the east entrance front and the northern crosswing have been
demolished, leaving the remains of a central 1st floor, 2-storey hall
of some magnificance, showing only as a number of blocked openings on
the outside walls. Its advanced plan can be compared to the
contemporary Raynham Hall, Norfolk. Col. Roger Whitley entertained
King William III here, on his way to Ireland and the Battle of the
Boyne.