Church of St Mary and Presbytery

A Grade II Listed Building in Bowling and Barkerend, Bradford 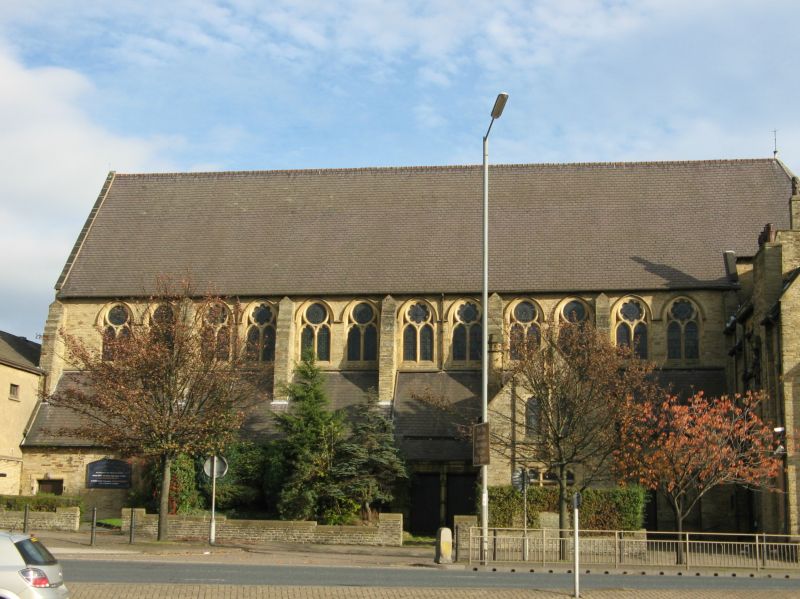 2.
Roman Catholic. 1874-76. Edward Simpson architect. A large, towerless, Gothic
church of sandstone "brick" with ashlar dressings. Simplified and Early English
details. Low shallow buttressed aisles, tall clerestory where the dominant feature
of the design occurs in the massive solid butresses rising on a slight curve from
the aisle roofs and dividing the clerestory lights in pairs. Lofty slate roof
running through over apsidal chancel. Gabled Lady Chapel projects towards street
line and the 3-storey gabled presbytery is built on to the east end. A tower was
intended but never executed. The height of the clerestory and the chancel arch
give a strong vertical emphasis to the interior, enhanced by the lightness of the
scissor braced roof trusses. The nave piers have shafts of Irish marble and the
whole is roughly pointed, particularly in the sanctuary with its gilded reredos.
Corbelled on angel brackets at the spring of the nave arcades are statues of the
saints with crocketed canopies above. Plain glass, apart from chancel. St Mary's
was built as the Roman Catholic Mother Church of Bradford, principally due to the
efforts of Canon John Motler, parish priest 1865-81. Much of the construction was
carried out by the parishioners themselves.