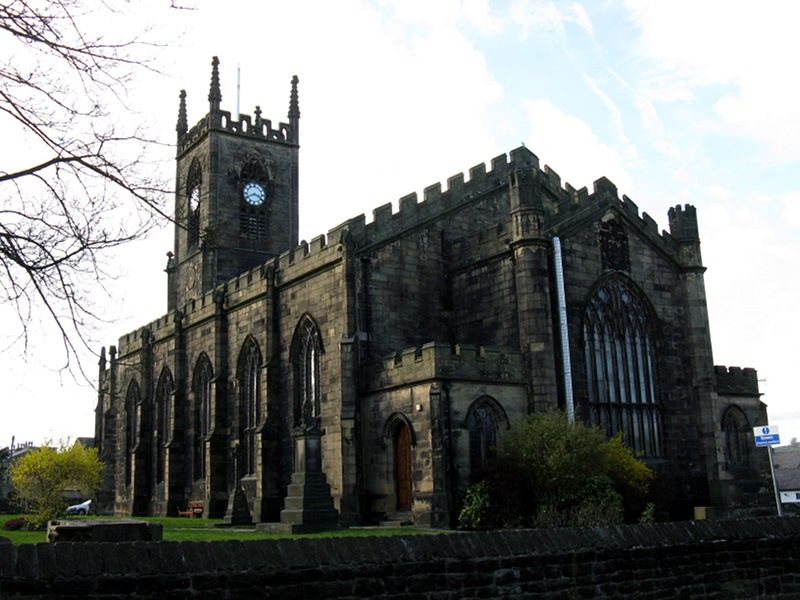 Commissioners' church. 1823-25. By John Oates of Halifax. Ashlar.
Welsh slate roof. Perpendicular style. 5-bay nave and aisle under
one roof, small chancel, west tower. Tall, 3-stage square west tower
with west door, under deep square hoodmould. The west window is of
three lights. 2-light windows to 2nd stage. 6-light transomed and
traceried bell-chamber openings with clock-face attached. Pierced
crenellated parapet and tall crocketed corner pinnacles. To north and
south sides of the tower is a former 2-storey porch. The entrances
are now part-blocked to form windows. The buttressed aisles have tall,
6-light, mullioned and transomed windows with cusped lights and intersecting
tracery. Crenellated parapets. The lower single-bay chancel has a large
14-light transomed east window with Perpendicular tracery. Above the
window is a square, elaborately detailed plaque with shield, helm and
crest. Octagonal corner towers to east end of chancel. Single-storey
porch to each side, all with crenellated parapets.

Interior: 5-bay arcade to north and south on octagonal piers.
Compartmental roof with plastered timber ribs and small bosses. North
and south galleries, the panelled and traceried fronts of which were
added in 1875. The west gallery has been renewed and has screen below
to form separate, full width hall at rear. Elaborate and finely-carved
stone pulpit of c1876-80. The lower part has a central pedestal with
figures in niches and is splayed to support the wooden, panelled and
traceried upper part. Elegant carved stone open stair. Octagonal
marble font with traceried panels. East window by F. Barnett of York
1858-60, partly obscured by later panelled reredos. Later C19 commemorative
glass to aisles.