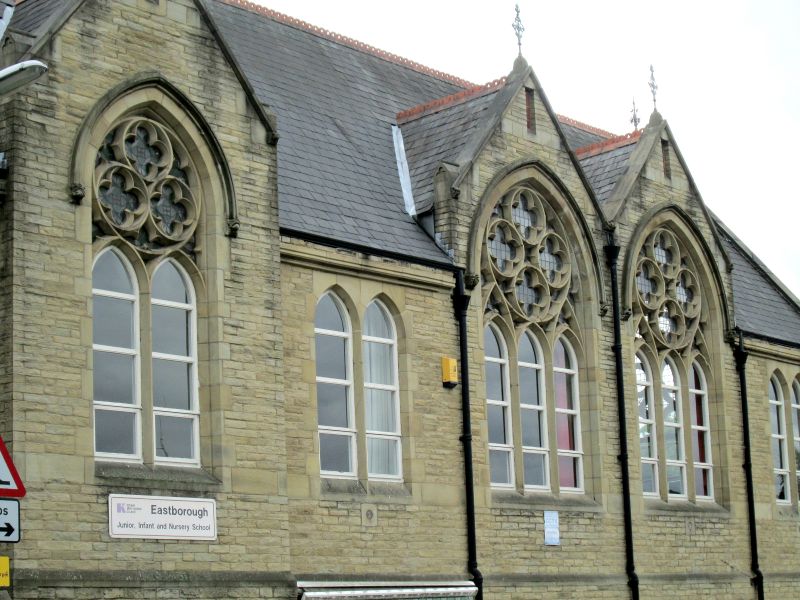 Former Board School in Gothic Revival style. Dated on tower 1879.
Hammer dressed stone. Gabled pitched slate roofs. Ordered asymmetrical
massing in 2 stylistic groups: 4 bays, single storey to the right,
9 bays both single and 2 storey to the left. The centre part is
double pile and, because of the sloping site, becomes 2 storey. The
left part of the facade consists of gabled bays with 3-light windows
with a large circle, with 4 quatrefoils in head alternating with bays
of triple lancets. At the lower level are 6-light mullioned and
transomed windowd with alternate flat and slightly cambered heads.
The 2nd bay from the left has the 'BOYS' entrance which has red granite
colonnettes and moulded arch with carved and panelled tympanum. This
is surmounted by a tall, octagonal slated spire which has an elaborate
cartouche with 'EASTBORO' BOARD SCHOOLS' in raised capitals. The
upper part of the tower has a louvred lancet to each face and long
stone rainwater chutes. The 4-bay part of the facade to the right
consists of two gabled cross-wings and a 2 bay central part which has
triple lancet windows. The cross wings have the 'GIRLS' and 'INFANTS'
doorways similar to the boys. In each gable is a traceried circle.
5 bays to right elevation, 3 being gabled and similar to those at front,
left. The rear block of the central part of the school consists of 2
storeys, four bays of 6-light mullioned and transomed windows.

Dwarf wall along the front has simple square cast iron railings, and
returns to the school. Three pairs of square, ashlar, gabled gatepiers
with conical caps.