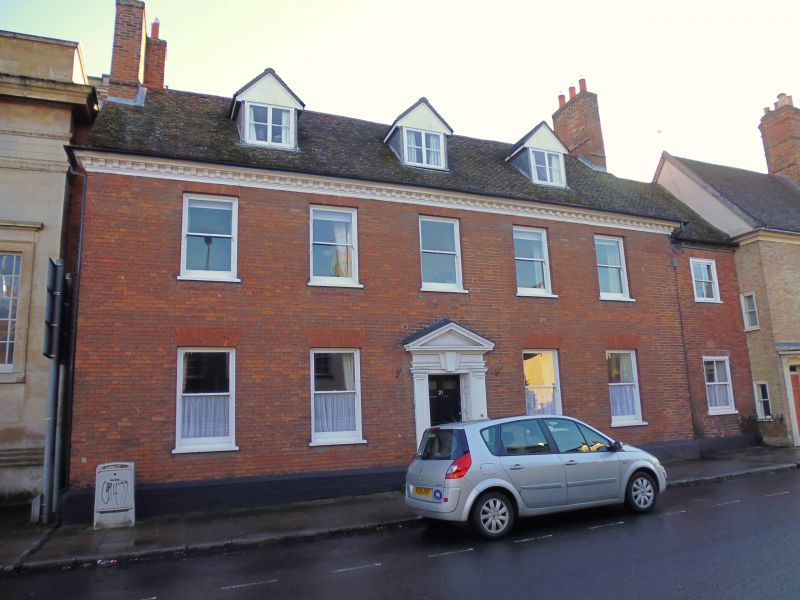 Formerly known as: No.21 St Edmund's House WESTGATE STREET.
House. Built 1760/61 for Fr John Gage S.J. and used
continuously since as the Presbytery for the adjoining Roman
Catholic Church of St Edmund (qv). Red brick with plaintiled
roof and a wood modillion eaves cornice.
EXTERIOR: 2 storeys, cellar and attics. 5 window range: sashes
without glazing bars in plain reveals with flat gauged arches.
3 gabled dormers with 2-light single bar casement windows. 2
gable end chimney-stacks. A recessed central 6-panel door
within a wood doorcase with panelled reveals, panelled
pilasters and a frieze with a central keystone and pediment.
A small 2-storey one-bay extension at the west end has a
single sash window with a single vertical glazing-bar in a
flush cased frame to each storey. A rear wing on the east, now
linked with the adjoining church, was built as a private
chapel but was formally licensed for public Roman Catholic
worship in 1791.
INTERIOR: retains many original features. Cellar, brick lined
with a high timber ceiling. Ground storey rooms are panelled
with ornate plaster cornices and internal window shutters with
sunk panels. 6-panel and 4-panel doors. A fine dog-leg stair
has vase-on-reel balusters, enriched bracketed open strings
and ramped and wreathed handrails.
An attic room at the east end of the house has original C18
framing and rafters exposed. The chapel has a galleried upper
storey at the north end which still forms part of the house.
(Rowe J: The Story of Catholic Bury St Edmunds, Coldham, etc.:
bury St Edmunds: 1980-: 12).