The Harbour Walls and Bollards 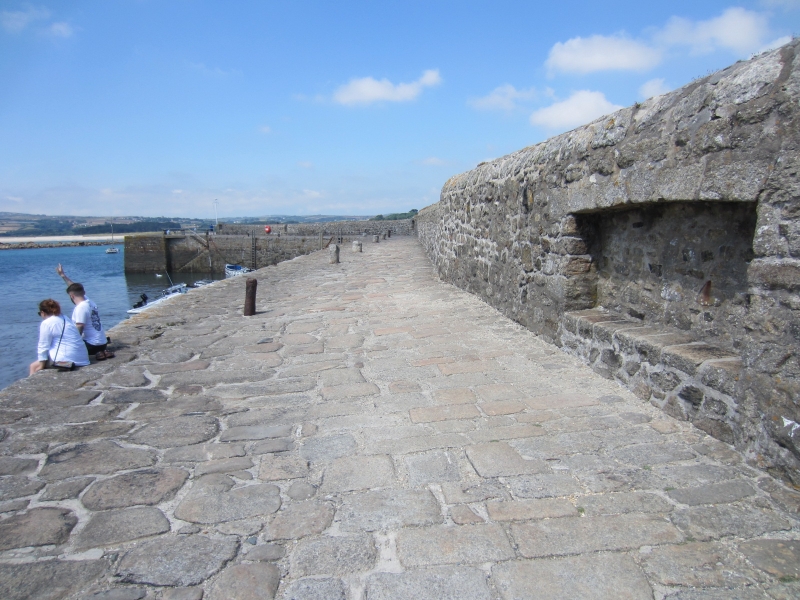 Harbour walls and bollards. Originally built circa early C15 for William Moreton,
archpriest of the Mount, remodelled circa 1727 for Sir John St Aubyn, the third
baronet and largely rebuilt in 1824 for Sir John St Aubyn, the fifth baronet, in
1824. Granite rubble and dressed granite cast-iron bollards (some of which are
reused cannons).
Plan: Irregular enclosure walled on 4 sides, the south side a retaining wall against
the north shore of the island, the north wall with a large harbour entrance, the east
wall adjoining the causeway to the mainland and the west wall incorporating a raised
walk behind the parapets. Steps inside the harbour on either side of the entrances,
2 flights steps up to a projecting quay on the south side of the harbour and 3
slipways leading to the south-east and south west corners of the harbour. Bollards
ranged slightly irregularly along the quays. Parapets on the seawards side of the 3
projecting walls. The walls of the harbour are slightly battered. The lower parts
of some of the walls are of large roughly-hewn irregularly coursed blocks possibly
C18 or earlier, above this in places are vertically set stones probably C18,
otherwise the upper parts of the walls, steps, coping stones and the paved surfaces
are probably mostly C19.
Sources : St Michael's Mount, by John St Aubyn;
the National Trust guide pamphlets.