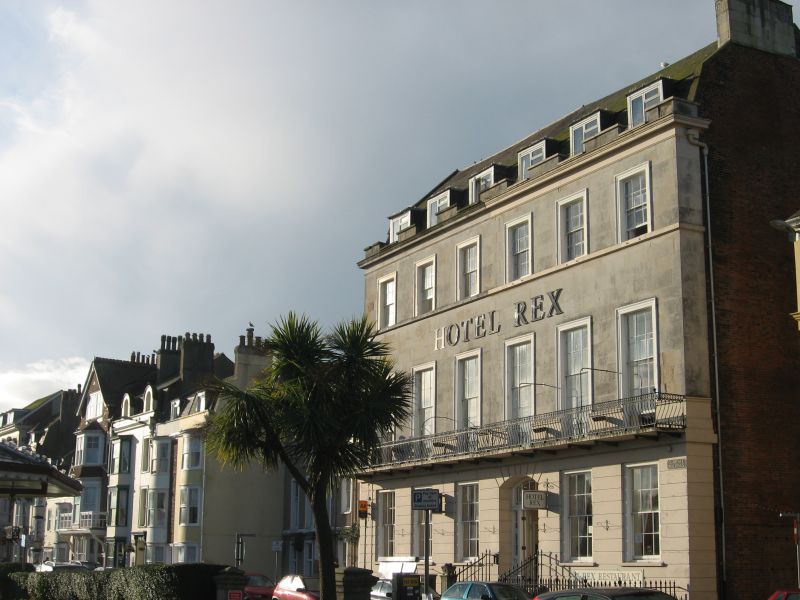 Formerly known as: Nos.11 AND 12 ESPLANADE.
Pair of houses, now hotel. c1840. For the Duke of Clarence.
Portland stone ashlar front, Flemish bond brickwork return,
slate mansard roof.
PLAN: building returns to St Alban Street to the right, and,
although presented as 2 houses, with differing boundary
enclosures, the layout is as for one grand house, with 2
principal salons and an off-centre lobby, and the staircases
to the left, running along the party wall.
EXTERIOR: 3 storeys, attic and basement, 6 windows;
flat-roofed dormers with C20 casements above 12-pane sashes in
moulded stone architraves, on continuous sill band, above deep
15-pane in architraves, opening to a balcony on cast-iron
brackets, with full-width scrolled wrought-iron balustrade,
returned at the ends and centre.
Ground floor has large 12-pane in channelled rustication, and
to the basement are 3 large 6-pane and a pair of French doors,
in full rustication. In bay 4 at ground floor, on 6 stone
steps, is a pair of panelled doors with side-lights and in
fluted pilasters, with moulded transom and delicate patterned
fanlight to a segmental head with channelled voussoirs. A
moulded stone cornice, returned briefly at the ends, and the
blocking-course is cut down in front of each dormer light.
Gables are raised and coped, with one ashlar and one brick
stack to the right.
The rear is part cement rendered, with a projecting unit with
asbestos- cement slate-hanging; the S half has a large brick
extension, but also a 28-pane stair sash.
INTERIOR: the inner lobby door repeats the pattern of the main
entrance doors, with panelled pilasters. Ground floor has a
principal salon to either side, with moulded cornices. There
remain many original 6-panel doors in architraves. The grand
staircase lies to the left, rear, rising full-height under a
fine elliptical rooflight with radial lead-covered iron bars,
and a modillion cornice ceiling. The stair is in Portland
stone, with open string and treads with nosings, plus
cast-iron balustrade. Immediately behind lies a second,
service staircase, which has a concave slate-hung outer wall

at roof height, facing the rooflight to the main stair.
The basement, in use as a restaurant, retains wine-racks to
either side.
SUBSIDIARY FEATURES: across the area frontage to the left half
is a stone balustrade with 4 square piers, and a gate to area
steps, and to the right half are original spearhead cast-iron
railings, returned to the entrance door and at the right-hand
end to a curved gate to area steps.
This is a grand house, although apparently presented as 2
properties, with only the one principal staircase. Interior
has undergone minimal changes.