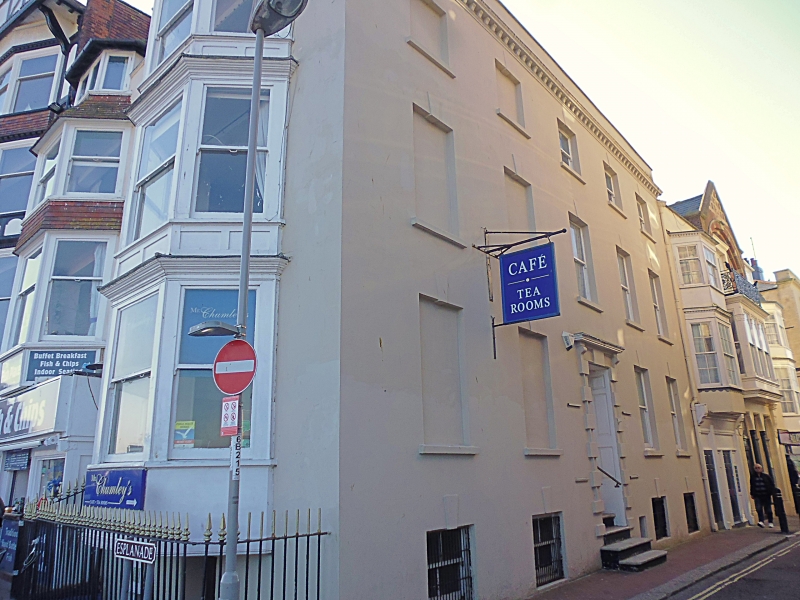 House at end of row, formerly hotel, now offices. Mid C18
(RCHME), mid C19 frontage to Esplanade. Rendered, slate hipped
roof behind parapet. The entry is from Bond Street, which has
the principal long facade.
EXTERIOR: 3 storeys, attic and basement, 1-window front to the
Esplanade, 5-window front to Bond Street. The Esplanade front
has a 3-storey canted oriel with plain sashes to moulded
cornices, and a full-width modillion cornice to the top floor;
in the plane of the main wall at basement level is a 4-pane
sash and a door, enclosed in slight spearhead railings, with a
gate at the left-hand end to stone basement steps.
The Bond Street front has blind openings to the first 2 bays
at each level, but there is a sash with grille at pavement
level; remaining windows are plain sashes, square to the
second floor and deeper below, all in plain reveals, and with
rendered keystones, and stone sills. At the centre, on 6 very
steep nosed steps, partly contained within deep panelled
reveals, is a C20 glazed door in a Gibbsian surround. A
modillion cornice, blocking course and parapet, and, to the
right, an early rainwater hopper.
INTERIOR:, restored in 1992, is said to have been in a state
of near collapse, and has been substantially restructured. The
central tight-well staircase has turned balusters and square
newels, and treads to scrolled ends, all based on the former
stair detail; the Chinese trellis recorded in RCHME is no
longer in situ. Each side of the stair was a single room, now
sub-divided in part.
This was one of the earlier houses on this part of the
sea-front; the basic layout and proportions remain on the N,
Bond Street front, but the former bow on the Esplanade front
was replaced in the C19 by the canted version now in place.
(RCHME: Dorset, South-East: London: 1970-: 346).